The political storm over a contentious extradition bill is set to escalate with pro-government lawmakers considering an unprecedented move to bypass normal vetting procedures to speed up its passage, the South China Morning Post reports:

The strategy was floated after the government expressed “utmost regret” over the “uncontrollable” disorder at a Legislative Council committee meeting on the bill on Saturday, when clashes between rival camps ended with at least four lawmakers claiming they were injured.The meeting was adjourned before a chairman could be elected to begin scrutiny of the bill, which would allow a case-by-case transfer of fugitives to places Hong Kong lacks an extradition deal with, including mainland China and Taiwan.

Anger over the proposal that would let people suspected of crimes be extradited to mainland China led to pandemonium in Hong Kong’s legislature on Saturday, as lawmakers scuffled and at least one was carried out of the chamber on a stretcher, according to The New York Times (HT: FDD).

Hong Kong democracy advocates this week bring their protest against the extradition bill to the United States, the Post adds. If the bill passes, Democratic Party founder Martin Lee warns, ‘there’s danger’ in coming to Hong Kong. Lee and activist Nathan Law have been asked to testify about the bill before the US Congressional-Executive Commission on China (see below).

China’s ruling Communist Party seems powerful at the moment, but China is at a crossroads, notes Benny Tai, associate professor of law at the University of Hong Kong. The kinds of cultural changes seen in Hong Kong may be coming to China before long, he wrote for The Diplomat, in an essay drawn from an article in the April 2019 issue of the National Endowment for Democracy’s Journal of Democracy.

A Hong Kong district court recently convicted nine core leaders of the 2014 Umbrella Movement of conspiracy to commit public nuisance, notes Victoria Tin-bor Hui, associate professor in political science at the University of Notre Dame. The movement demanded “genuine universal suffrage” because successive chief executives unaccountable to the public have eroded Hong Kong’s freedoms. Protestors will persist on or off streets if the root causes are unresolved, she wrote for the Journal of Democracy. 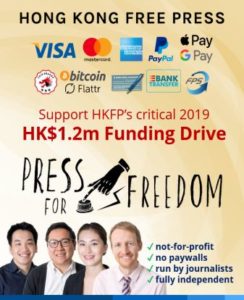 The National Endowment for Democracy (NED) hosts a discussion on “New Threats to Civil Society and the Rule of Law in Hong Kong.”

The Congressional-Executive Commission on China holds a hearing on “Hong Kong’s Future in the Balance: Eroding Autonomy and Challenges to Human Rights.”