It is often said that Russia is a competitor to western democracy. But that is misleading. Its regime is a model only to other budding kleptocrats, the FT’s Edward Luce observes. Alas, the west’s chief ideological threat comes from within. Mr Putin’s wealth extraction machine reveals the west’s moral failings. His abettors could not do it without our connivance. This is especially true of the US and Britain, he contends:

In contrast to most western democracies, the US and UK permit anonymous ownership. Most democracies legally require the beneficial owner of an asset, such a company or property, to be made known. Not so in the largest English-speaking democracies. Roughly $300bn is laundered in the US every year, according to the US Treasury. Britain and its offshore financial centres take in about $125bn. Most of it goes undetected. The largest foreign share of it is Russian, according to Anders Aslund, a leading specialist on Russia’s economy. Estimates of Mr Putin’s personal wealth range from $50bn to $200bn. Even the lower figure would exceed the gross domestic product of most UN member states. Yet we have taken few steps to disrupt it.

The West must act firmly to destabilize Putin and the aging kleptocracy that currently rules the Russian Federation, and help Russia truly integrate into the family of nations. Only the Putin regime is holding Russia back, analyst Rob Dannenberg writes for Cipher Brief.

Britain’s primary aim is to protect itself from the corrupting influence of Russian kleptocracy, argues analyst Mark Galeotti, senior researcher at the Institute of International Relations Prague and head of its Centre for European Security:

Whatever the reasons behind the Skripal hit, much of the Moscow-related violence in the country, after all, seems more associated with the incestuously interconnected worlds of Russian crime and Russian business than with the Kremlin. Besides which, so long as “Londongrad” remains a haven for dirty Muscovite money, it not only exerts a limited but definite influence on Britain but also facilitates the criminal regime in Russia.

Seeking to cleanse Britain of Russian kleptocratic influence is an admirable and overdue goal but does little to deter future aggression, he writes for Foreign Policy.

Certainly, there is a wealth of targets, the AP adds: 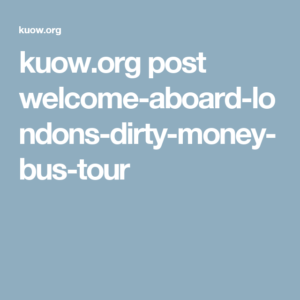 In London, ClampK – the Committee for Legislation Against Money-laundering in Property by Kleptocrats, runs “kleptocracy” tours that identify properties in London owned by oligarchs or other Russians who are close to the Kremlin. It is lobbying to change the laws that make it easy for these properties to be bought with illicit funds.

To really punish Putin, Britain will have to crack down on his associates’ illicit funds, the Atlantic’s Yasmeen Serhan argues:

Though U.K. Prime Minister Theresa May’s government has said it is considering reprisals that include imposing greater security checks and targeted sanctions against Putin’s associates in the U.K., such action has not yet been taken.

“It actually emboldens the kleptocratic Kremlin elites—they feel like they really own Britain,” said ClampK founder Roman Borisovich (left), a Russian banker-turned-anti-corruption activist, noting that the U.K.’s willingness to turn a blind eye to money laundering has made London a particularly attractive haven for Putin’s kleptocracy.

Under Putin, gangsterism on the streets has given way to kleptocracy* in the state, according to Galeotti.

“The modern Russian state is a much stronger force than it was in the 1990s, and jealous of its political authority,” he writes for the Guardian. “The gangs that prosper in modern Russia tend to do so by working with rather than against the state. In other words: do well by the Kremlin, and the Kremlin will turn a blind eye. If not, you will be reminded that the state is the biggest gang in town.”

*The subject of a special issue of the National Endowment for Democracy’s Journal of Democracy.