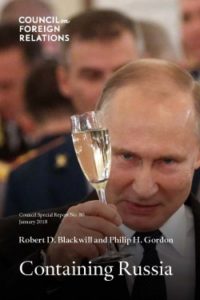 Newly-appointed National Security adviser John Bolton laid out his proposed strategy to respond to Russia’s “unacceptable” meddling in the 2016 presidential election and to Russian aggression around the world, speaking last month at the Daniel Morgan Graduate School of National Security, the Washington Post’s Josh Rogin reports:

The United States should respond in “cyberspace and elsewhere,” said Bolton [who is generally held to be hostile to democracy promotion], suggesting offensive action against the Russian operatives that perpetrated the interference. Only if the response is overwhelming will Russia and other countries be deterred.

“It’s really an attack on the United States Constitution….. I don’t think the response should be proportionate, I think it should be very disproportionate,” he said.

Until fairly recently, after every election in Russia, the question being raised was who would prevail in the Kremlin: Western-style modernizers or anti-Western hard-liners? This question is no longer relevant, argues Ivan Krastev (right) the chairman of the Center for Liberal Strategies and the author, most recently, of “After Europe.”

The coming generational change in Russian reality tells us little about the future of the regime, because President Putin is its biggest asset but also the biggest vulnerability, argues Krastev, a regular contributor to the National Endowment for Democracy’s Journal of Democracy. He dominates the political scene to the extent that he promotes to the top only people with moderate ambitions who know how to work for the president effectively but could not be the president, he writes for the New York Times:

The irony is that Mr. Putin is placing these new technocrats in power as an alternative to his failed attempt to reinstall the current prime minister, Dmitri Medvedev, as his successor. But in reality the Putin generation is just a collective Medvedev. And when it comes to what post-Putin Russia will look like, the president is back where he was when he put Mr. Medvedev in the Kremlin and then decided to return to his old office.

It is often said that Russia is a competitor to western democracy. But that is misleading. Its regime is a model only to other budding kleptocrats, the FT’s Edward Luce observes. Alas, the west’s chief ideological threat comes from within. Mr Putin’s wealth extraction machine reveals the west’s moral failings. His abettors could not do it without our connivance. This is especially true of the US and Britain, he contends:

In contrast to most western democracies, the US and UK permit anonymous ownership. Most democracies legally require the beneficial owner of an asset, such a company or property, to be made known. Not so in the largest English-speaking democracies. Roughly $300bn is laundered in the US every year, according to the US Treasury. Britain and its offshore financial centres take in about $125bn. Most of it goes undetected. The largest foreign share of it is Russian, according to Anders Aslund, a leading specialist on Russia’s economy. Estimates of Mr Putin’s personal wealth range from $50bn to $200bn. Even the lower figure would exceed the gross domestic product of most UN member states. Yet we have taken few steps to disrupt it.

Even authoritarian rulers like Putin face strong domestic elites they must appease to stay in power, notes Lionel Beehner, director of research of West Point’s Modern War Institute. Unlike their democratic counterparts, autocracies purposely keep their conventional forces weak to lower the threat of a coup, he writes for the Washington Post’s Monkey Cage:

Why? One explanation is that today’s autocrats are less secure domestically than their predecessors. A recent survey in Russia found that only a third of Russians favored the Kremlin’s military support of President Bashar al-Assad. The popularity of the Russian intervention has waned as casualties have climbed. Despite his near-absolute power, Putin is not immune to this public pressure.

“Coordinated action is needed to defend freedom and democracy,” he adds. “It is crucial to reject every each attempt by Mr. Putin to poison our community of values, whether by attacking his former people in the West, redrawing borders or disrupting western elections.”