On November 15, 1989, Polish democracy and labor leader Lech Walesa became the second private foreign citizen ever to address a joint session of the United States Congress – preceded only by the Marquis de Lafayette.  At the time, Walesa was the victorious leader of Solidarity, the mass movement for democracy and worker rights and catalyst for the peaceful democratic revolutions throughout Central and Eastern Europe and the USSR.  Inspired by Walesa’s message of democratic solidarity, the Congress responded with a five-minute standing ovation and subsequently provided substantial support for the new democracies of the region.

The National Endowment for Democracy invites you to a reception marking The 30th Anniversary of Poland’s 1989 Democratic Breakthrough with a special tribute to
Lech Walesa, Former President of Poland, Leader of Solidarity Labor Movement. 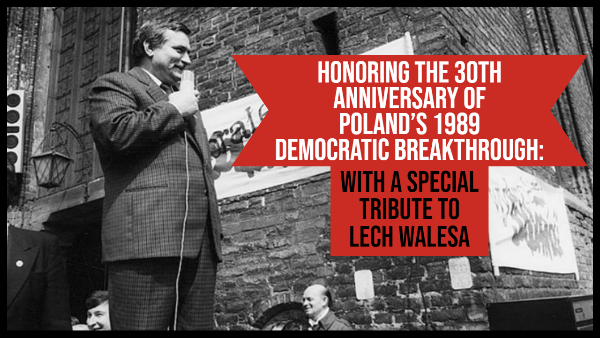