Preliminary results in Ukraine’s parliamentary election suggest President Volodymyr Zelensky’s Servant of the People party is on course to win big as Ukrainians endorse his reform agenda. The Central Election Commission (CEC) said the ruling party had secured 42.35% of the votes after almost a half had been counted on Monday, Euronews reports: 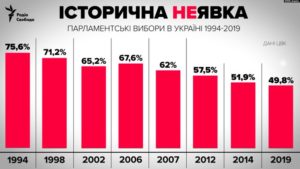 But the early distant lead for the Servant of the People party, which is led by Dmytro Razumkov, was somewhat overshadowed by reports of poor voter turnout. The turnout was registered at 49.9%, which was the lowest ever in the history of Ukraine’s parliamentary elections, and was the first time it dipped below 50%.

“The results at the polls will give Zelenskiy a pliable government and free his hands from the shackles of the former establishment,” said Serhiy Shapovalov, an analyst with Kiev-based think tank Democratic Initiatives. “Zelenskiy has gained political clout very fast and has transitioned from a comedian into a politician who can wield influence in all branches of power in Ukraine,” he said.

“Zelenskiy’s party will have a majority in the parliament and it is very likely that it will be a vast majority. That’s a total surprise that they won so many in constituencies,” said Volodymyr Fesenko, an analyst at the Penta Center for Political Studies.

Aivaras Abromavicius, a former minister of economy and trade and a Zelenskiy supporter, described the win to RFE/RL as “about as good as it gets.” But the result sets up a test for benevolent populism, Bloomberg suggests.

With at least 50 independent candidates winning in single-mandate districts, Zelenskiy’s majority could grow stronger should some of them choose to join his party once in parliament, POLITICO reports.

“The result frames a de facto presidential republic,” said Balázs Jarábik, a nonresident scholar at the Carnegie Endowment for International Peace who focuses on Ukraine. “His power will be much stronger than ever before.”

For the moment, Zelenskyy holds all the cards and can mold a government of his choice. He seeks to build a government of competent experts headed by an economist, adds Adrian Karatnycky, senior fellow at the Atlantic Council and managing partner of Myrmidon Group LLC:

Such a government can serve Ukraine well, but it will face the challenge of a vocal parliamentary opposition, including a large Russian fifth column. One hopes that, even if not required, Zelenskyy will seek a coalition with the Holos party, which has a significant group of skilled and experienced reformers and activists in its ranks.

Zelenskiy will now have to manage the high expectations that his large mandate has generated, Reuters adds. A pre-election survey by the Washington-based National Democratic Institute* said 45% of voters expected Zelenskiy to negotiate a peace in the Donbass within 12 months — the biggest single priority among voters.

Some 67 percent of Ukrainians approve of Zelenskiy’s job performance, according to an International Republican Institute* survey released in July.

“Clearly the Ukrainian people continue to support President Zelenskyy and his reform agenda, as reflected by the extremely high percentage of votes for his political party in these elections,” said Stephen B. Nix, IRI Eurasia Director. The timing of these elections may have been a factor in lower voter turnout. “With summer holidays ongoing, political parties and candidates, particularly those with less experience, had less time to prepare. Election commissions had less time to train new members, and those with travel plans—including voters—may have been unavailable to participate,” said Nix. 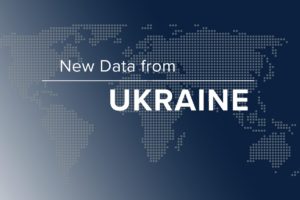 But amid the talk of renewal, some say they fear the vote could result in “revanche,” RFE/RL’s  Christopher Miller writes:

Revanche has become a way to describe what those warning of it say they fear is the return of powerful tycoons and political elites from the era of Moscow-friendly former President Viktor Yanukovych, and the perceived threat of a tilt toward Russia and a rollback of progress half a decade after the pro-Western Euromaidan protests pushed him from office.

“[Former president Petro] Poroshenko’s party is seeking to inflate this issue as much as possible, especially on social networks, and scare former Euromaidan supporters with the threat of ‘revenge,'” says Penta’s Fesenko. “At the same time, Poroshenko is trying to convince voters that only his party can protect against revanche.”