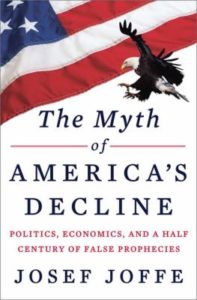 The alarmists have a point. The Liberal International Order (LIO) has many enemies. One is populism, the insurgency against the institutions of representative democracy, flanked by the revolt against fourth estate—the “fake news” media. Another foe is surging nationalism. Its targets are immigration and the free movement of goods and capital, a mainstay of the LIO, notes analyst Josef Joffe,. author of The Myth Of America’s Decline.

But more is at stake than the LIO. Add the ComDem—the Community of Democracies—to the list of endangered species. Authoritarianism seems to be on a roll as well. So say good-bye not only to the LIO, but also the liberal state and constitutionalism that define the ComDem? These trends are certainly worrisome. But reality is, as always, more complex, he writes for the American Interest:

Nowhere has an established democracy collapsed, not even in Poland or Hungary. Conversely, where is Croatia’s operetta dictator Franjo Tudjman? He is gone, as is Serbia’s Slobodan Milosevic. Last May, ten million Iraqis went to the polls in a competitive election marred by little violence, and this after decades of war and the advance of ISIS to the gates of Baghdad.

Poland gets top billing in the authoritarian revival. Yet in May 2018, 50,000 demonstrators marched through Warsaw. By year’s end, he opposition swept the cities, capturing local power. If general elections were held today, it would be do widzenia to Kaczynski. ….True, illiberal parties have entered into almost all parliaments of the EU. On the other hand, their democratic rivals in the EU have retained 80 percent of the votes.

The West may even be resurgent, notes one observer. But it’s not the liberal-democratic cosmopolitan West of intellectual elitists like Bernard-Henri Levy, Irish writer John Harris writes for First Things:

The late French philosopher Jean Baudrillard once observed that, although each part of the American continent feels different from every other part, there is also a pervasive American essence. Europe is not like that. What became “The European Union” was never articulate about itself in cultural terms, but instead resorted to a language and logic of materialism and secular democracy, which writers and artists failed to plumb, bypass, or otherwise negotiate.  …..

“A revolution is happening across the free world….. a revolution from the concrete center, from the places where working people live and work to build, fix, paint, and clean the world as their antecedents did for thousands of years,” he contends. “It is fundamentally a reaction against lies, intimidation, official stupidity, and political correctness.”