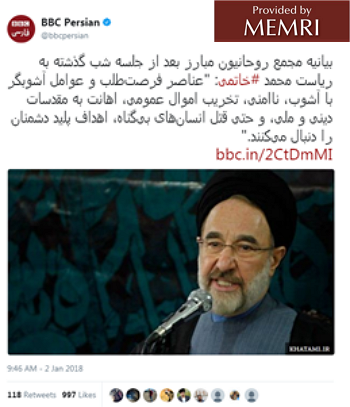 The protestors in last month’s uprising shouted slogans not only against Iran’s Supreme Leader Ali Khamenei and the Iranian revolutionary regime, but also against President Rohani and the reformists. Thus, it is appropriate to examine the role played in the uprising by President Rohani, who represents the pragmatic stream, and by the reformists in the country, who have been excluded from power in recent years on Khamenei’s instructions, according to MEMRI:

The leaders of the reformist parties outlawed by Khamenei, and prominent intellectuals from Iran’s reform movement, would have been expected, if not to actually join the uprising, at least to express support for its calls for political freedom, and for the lifting of the requirement that women wear Islamic garb. But this did not happen. The leading reformists actually lined up with the regime and condemned the young Iranians who were protesting.