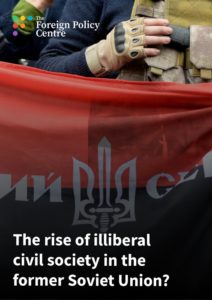 Disinformation is one of several tools in the Kremlin toolbox as Russia plays a leading role in promoting illiberal, anti-Western and socially conservative civil society groups, popular movements and political forces in five post-Soviet states: Georgia, Armenia, Ukraine, Kyrgyzstan and Moldova, according to a new analysis.

While political and social forces challenging liberal ideas have been emboldened in these five countries, they still predominately utilize traditional mechanisms of institutional power (such as the church or mosque or existing political elites) rather than fully mimicking the form and function of liberal civil society, according to The Rise of Illiberal Civil Society in the former Soviet Union, a new report from the UK-based Foreign Policy Centre.

“At this stage many of the attempts to create illiberal NGOs or think tanks remain comparatively marginal in the political debates on socially conservative causes, or act as window dressing for politicians and priests rather than being the driving force of campaigns,” the authors note, adding that “the illiberal energy is on the street rather than in the conference hall. This is an ‘uncivil rights movement’ of overlapping far-right, radical nationalist and anti-LGBTI groups, rather than a simple cut and paste from the technocratic liberal NGO playbook.”

“It is clear that illiberal civil society is on the rise in these five countries but it is growing in its own way rather than simply aping its liberal counterparts. Russia has an important role in the rise of illiberal civil society across the region, in particular the way it has disseminated and promoted the concept of ‘traditional values’,” the report adds. “However it is important to recognize that while some groups have direct or indirect contact with Russia, many do not and that the primary drivers of such activity are to be found in the local societies of the countries at hand.”

As greater European integration flounders, as immigration fears rise even as immigration falls, as populism becomes a badge of honor and a pole of attraction, and as serious people such as former US secretary of state Madeleine Albright warn of a new authoritarian era, so a new Illiberal International is picking up speed, Financial Times contributing editor John Lloyd writes for the New Statesman.

Civil society should work to identify the ‘moveable middle’ groups in society who are currently skeptical about liberal social values but are not passionate in their opposition to them and who might be open to engagement and persuasion, says the FPC report, which makes a number of recommendations. The Governments of Ukraine, Moldova, Georgia, Armenia and Kyrgyzstan should: