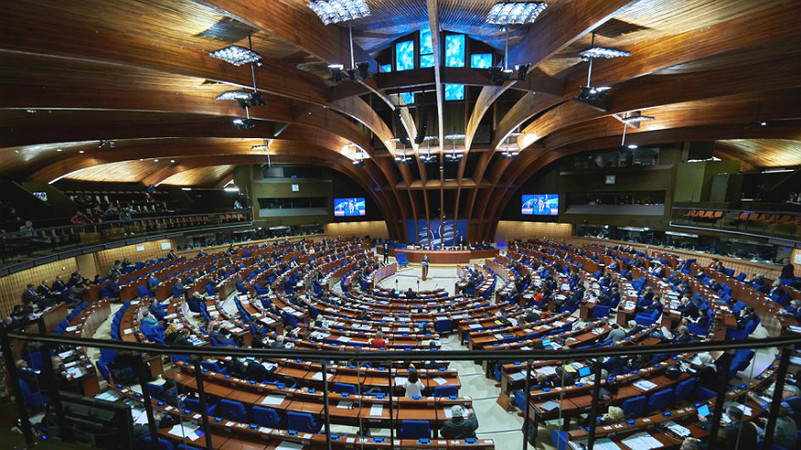 The late Russian president Boris Yeltsin once said his country’s entry into the Council of Europe would help create a “new, greater Europe, free from dividing lines” and “united by common democratic principles”. More than two decades on, such lofty rhetoric around the institution charged with guarding a continent’s fundamental freedoms is in danger of being drowned out by a political battle that has exposed faultlines in east-west relations and the wider international multilateral order, The Financial Times reports:

In Strasbourg on Monday, MPs from Ukraine and a handful of other countries were expected to mount a final effort to try and stop the 47-member body agreeing to end Russia’s five years of estrangement from the organisation that was sparked by its 2014 annexation of Crimea. Opponents say the plan to bring Moscow back in from the cold risks compromising the very ideals that brought the council into being as a post-second world war bulwark against atrocities and arbitrary state power.

The return of the Russian Federation to the Parliamentary Assembly of the Council of Europe (PACE) would weaken the organization and undermine its rules, analysts suggest.

“This would be the unilateral surrender of the Council of Europe to Russian demands,” says Dmytro Kuleba, Ukraine’s ambassador to the council, who fears the body’s parliamentary assembly will on Monday rubber-stamp a decision, taken in May by foreign ministers, to allow Moscow’s return.  “What’s happening now, to help Russia, will actually undermine human rights and the protection of the rule of law across Europe,” says Mr Kuleba. RTWT

Those who really care about compelling the Russian authorities to observe international law should focus on finding more effective ways and tools than sanctions, argues Konstantin Baranov, a member of the coordinating council of the International Youth Human Rights Movement, and Yuri Dzhibladze, president of the Centre for the Development of Democracy and Human Rights (Russia) and coordinator of the advocacy task force at the EU-Russia Civil Society Forum.How this can be done? they ask in EU Observer:

One reason Russian president Vladimir Putin is so contemptuous of western power is because so many of its elites have been so easily bought, The FT’s Edward Luce adds, in a review of Larry Diamond’s Ill Winds: Saving Democracy from Russian Rage, Chinese ambition, and American Complacency.

“Kleptocracy is a cancer that is eating away at the vital organs of our democracies,” Diamond writes. The dangers posed by China are more subtle but ultimately greater, adds Luce:

Diamond is in no doubt that China is directly challenging the western democratic model. Beijing now lavishes $10bn a year on overseas propaganda — five times what the US spends on democracy and human rights promotion. At $38bn, China’s foreign aid budget is the largest in the world. There are now 525 Confucius Institutes covering every continent. Xinhua, the state news agency, has 180 bureaus, making it the fourth largest in the world behind the Associated Press, Reuters and Agence France-Presse. Most importantly, its trillion dollar Belt and Road Initiative is more than 10 times larger than America’s postwar Marshall Plan in today’s dollars.

Whether he is a grand strategist or merely an opportunist, Putin is efficient in identifying vulnerabilities. He knows how to widen cracks, notes The American Interest editor-in-chief Jeff Gedmin.

Everywhere I go in Europe—I was in London, Berlin, and Prague the week before Helsinki, Tallinn, and Riga—European defense and intelligence experts seem to be uniting around the idea that Putin sees a bigger picture, namely that of the West in crisis, and sees his role as being a stoker, arsonist, and provocateur, he writes. RTWT

Russia is also joining Turkey and China in projecting soft power in the Western Balkans, notes analyst Agata Palickova. Russia has also established a monopoly in Serbia’s energy sector, even though its overall share of investments in Serbia is not huge, she writes for EURACTIV.com.

Russia-friendly narratives can be seen in media thanks to the presence of Russia’s Sputnik news agency and the television Russia Today, Palickova adds. These soft power tools promote Russia in the Balkans. Russia has also been friendly with Bosnian Serbs and their leader, Milorad Dodik.