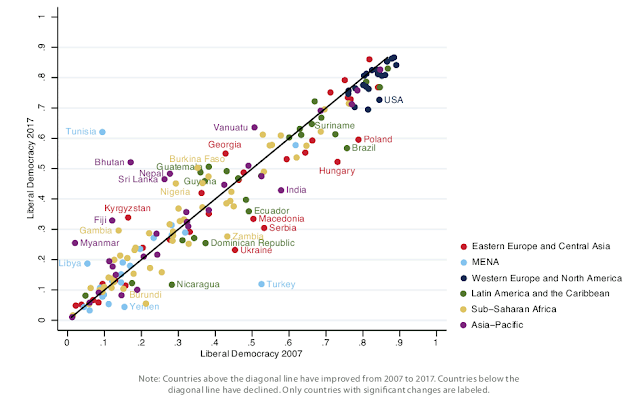 V-Dem defines autocratization as any substantial or significant worsening on the scale of liberal democracy in a country and the ”third wave” alludes to unprecedented number of countries currently being affected, Ryan White writes for Democracy Without Borders.

Yet for all its recent setbacks, democracy still has the resources not only to resist but also to beat back the authoritarian tide, a leading analyst observes.

The inspiring and indefatigable protests in Hong Kong and Khartoum, and in a host of other places from Kinshasa to Kazakhstan, remind us that oppressed people will take risks to press for freedom whenever the opportunity arises, and that tactics of non-violent civil resistance can work to challenge the mightiest bastions of tyranny, argues Stanford University’s Larry Diamond.

The truth is, people want to be free, and international law gives them broad rights to civil and political freedom. No military coup, no authoritarian playbook, no election fraud, no party ideology, no system of surveillance can extinguish those realities. The great question now is whether we in the wealthy Western democracies will recommit to our own constitutional norms and founding ideals, he writes for The American Interest:.

Even a casual acquaintance with the history of the last century clearly points to the path we must take. It is important to recognize not only the danger but also the opportunity. True, established democratic institutions may be performing poorly and losing public confidence. But democracies offer their citizens the means to reform and correct them without overthrowing them. Dictatorships do not. Hence, they are always a step away from a whopping legitimacy crisis.

Ronald Reagan’s Address to the British Parliament on June 8, 1982, accelerated momentum for the establishment of the National Endowment for Democracy, he adds, and ignited a new generation of efforts by the U.S. and European democracies to assist struggles for freedom around the world.