Sergei Kovalev, a leading Russian dissident and human rights activist who fought for the victims of oppression in Soviet times and opposed Moscow’s war against Chechen separatists in the 1990s, died Monday in Moscow. He was 91, The Washington Post reports:

Kovalev was a tireless advocate for Russian democracy and a bitter critic of President Vladimir Putin and his moves to curb rights groups, freedom of speech and the right to protest. His death was confirmed by Memorial, the human rights organization he helped found, and by his son, Ivan Kovalev, who said on social media that his father died at home in his sleep. The cause of his death was not announced, but he had been in poor health in his final years.

As a biology student, Kovalev had dreamed of devoting himself exclusively to science. But he changed his mind after the arrests of dissident writers Yuli Daniel and Andrei Sinyavsky. “I then understood that it was not possible to only be in science,” he said. “It would have been shameful,” AFP reports:

In 1968, Kovalev was fired from his job at a Moscow university laboratory for joining the Action Group for the Defence of Human Rights in the USSR — considered to be the Soviet Union’s first rights group. He then grew close to the dissident academic Andrei Sakharov.

He was part of a group of dissidents writing the “Chronicle of Current Events”, an underground typed bulletin that reported on human rights violations in the USSR. It reported the arrests and psychiatric internments of the Soviet regime’s opponents and on the situation in its labor camps. He was arrested in 1974, accused of spreading “anti-Soviet propaganda” and sentenced to seven years in a Gulag camp, followed by three years of house arrest in the icy Siberian region of Kolyma. 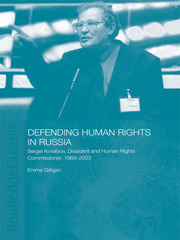 His parents sought to implant “the practice of silence and acquiescence” instilled in many Soviet citizens by Stalinist purges, according to Emma Gilligan, an Australian scholar and author of “Defending Human Rights in Russia,” a detailed 2009 biographical study, The Times adds:

Yet even in his teenage years, he argued with his teachers about supposed constitutional guarantees of free speech, Ms. Gilligan said, foreshadowing “the fastidious personality and encyclopedic approach to problems” that would later suffuse his work as an editor of the most important clandestine human rights journal of his time.

Kovalev was one of a “small and amazing group of people who dared challenge the Soviet totalitarian system,” said Russian democracy advocate Vladimir Kara-Murza. It is “impossible to overestimate” his contribution to the country’s eventual democratic transition, he told the BBC.

“You could check your moral compass with him,” activist Varvara Pakhomenko tweeted.

Wladimir Tolz of RFE/RL’s Russian Service spoke to Kovalev on his 80th birthday about his activism (above).

Memorial called Kovalev’s death “an irreparable loss,” the Post adds. The organization has been under severe pressure from Russian authorities after being declared a foreign agent in 2016.

Russia’s first Chechen war, from 1994 to 1996, created an enduring rift with President Yeltsin, a onetime ally, as  Kovalev rejected the government’s attempts to explain and justify the conflict, the Times adds:

In a public letter of resignation from President Yeltsin’s Human Rights Commission, published in 1996 in The New York Review of Books, he accused the Russian leader of making decisions that “have revived the blunt and inhumane might of a state machine that stands above justice, law and the individual.”

“Only you are in a position to stop this senseless war,” he wrote to Yeltsin in December 1994. “Every day, with our own eyes, we see the planes bombing residential buildings. Every day we see the corpses of peaceful civilians, fragments of people, some without heads and others without legs.”

Kovalyov was an equally staunch critic of Vladimir Putin’s authoritarianism.

“Putin has in effect created a myth of the imperial state,” he wrote in 2007, “a myth derived from elements of pre-revolutionary Russian history and the Soviet past — that serves as a substitute for historical memory.” 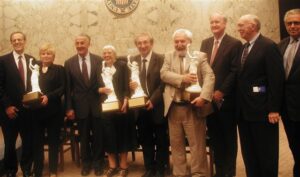 Kovalev’s was a mentor to and close associate of leading democracy advocates, including human rights lawyer Mara Polyakova, a recipient of the National Endowment for Democracy’s 2004 Democracy Award (right).

U.S. Senator John McCain presented Kovalev and Elena Bonner with the NED’s Democracy Award in 1995, and Kovalev’s video message to the NED’s Sakharov centennial event in May was his last public statement.

He was an architect of the All-Russian Extraordinary Congress in Defense of Human Rights, which convened more than 1,000 activists for the largest gathering of its kind in the history of Russia in January 2001, The Journal of Democracy reported. The event, responding to concerns that basic rights and freedoms guaranteed by the Russian constitution were under increasing threat, was organized by major Russian human rights organizations, including the Andrei Sakharov Foundation, the Moscow Helsinki Group, Memorial, the “Za Prava Cheloveka” Foundation, and the Glasnost Defense Foundation.

Sergei Kovalev, well-known and admired as a stalwart defender of fundamental rights who always spoke his mind and never compromised on principles, died in Russia today, aged 91. Watch HRW’s interview with him, recorded in 2011. @hrw https://t.co/T3Q8L5sdDI