Labor and democracy activists are mourning the passing of AFL-CIO President Richard Trumka.

“The labor movement, the AFL-CIO and the nation lost a legend today,” said AFL-CIO Communications Director Tim Schlittner. “Rich Trumka devoted his life to working people, from his early days as president of the United Mine Workers of America to his unparalleled leadership as the voice of America’s labor movement.” 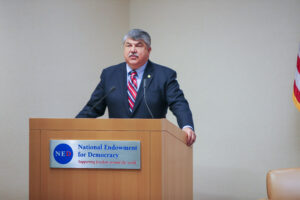 A former leader of the United Mine Workers, Trumka has led the AFL-CIO since 2009 and served as chair of the board of trustees of the Solidarity Center, a core institute of the National Endowment for Democracy (NED).

“We @SolidarityCntr and the entire global labor movement are mourning the loss of a tremendous leader, relentless champion of workers’ rights, workplace safety, worker-centered trade, democracy and so much more,” the Center tweeted (below).

The Solidarity Center is the conduit through which the Endowment supports independent labor unions worldwide.

“The passing of Richard Trumka is a loss not just for America’s workers, but for workers worldwide who fight for safe workplaces and the democratic right to organize,” said NED president Damon Wilson. “The entire NED family is grateful for Rich’s unflagging commitment to improving the lives of workers everywhere and for supporting the right to independent organizing of trade unions, which are essential to healthy democracies.”

At a NED event in 2019 to mark the 30th anniversary of Poland’s Solidarity triumph, he  introduced former president of Poland and Solidarity leader Lech Wałęsa (above) prior to a panel discussion on defending democracy in Poland and Central Europe.

“During Lech Wałęsa’s address to the joint Congress, three words got the biggest response—‘we the people.’ Not ‘we the politician,’ not ‘we the corporation,’ and not ‘we the executive,’ but ‘we the people,’” Trumka observed at the 2019 forum. “Lech Wałęsa reminds us that change can come from unexpected places and working people are always ready to answer the call of leadership. Let’s answer that call again today.”

We @SolidarityCntr and the entire global labor movement are mourning the loss of a tremendous leader, relentless champion of workers’ rights, workplace safety, worker-centered trade, democracy and so much more—our Brother, Rich Trumka. https://t.co/L2Yhr5ycCz

A true supporter of international democratic and labor solidarity, as demonstrated by his sterling support for @NEDemocracy partner @SolidarityCntr https://t.co/4Udjsf1G1U