When it comes to combating the Covid-19 pandemic, no one country can expect to achieve its full potential by going it alone, not even the United States. Bold action is needed to set a new course that enhances the ability of the world’s democracies to out-compete increasingly capable illiberal states, analyst Martijn Rasser, a senior fellow at the Center for a New American Security:

The growing clout of authoritarian regimes is not rooted in better strategy or more effective statecraft. Rather, it lies in the fractious and complacent nature of the world’s democracies and leading technology powers…. An alliance framework for technology policy is the best way to ensure that the world’s democracies can effectively compete economically, politically, and militarily in the 21st century.

These relationships are an enduring and critical advantage that no autocratic country can match, he writes for c4isrnet. It is time to capitalize on these strengths, retake the initiative, and shape the post-corona world.

The West has singularly failed to assume political leadership during this global pandemic, while China and Russia share the same narrative, notes Judy Dempsey,  a nonresident senior fellow at Carnegie Europe and editor in chief of Strategic Europe.

They blame the West, in particular the United States for starting it. And in a bid to weaken the West and the fraying transatlantic relationship, their disinformation campaigns have targeted Europe, which is highly vulnerable to such propaganda, she adds. Yet during a crisis of this magnitude, democracy cannot be put on the back-burner. If anything, there’s more than ever a need for democratic institutions and governments to become more inclusive and transparent.

The EU is currently missing in action or paralyzed in its foreign initiatives, notes Andrés Ortega, Senior Research Fellow at the Elcano Royal Institute. As the Korean philosopher Byung-Chul Han argues, ‘as a consequence of the pandemic, Europe has lost all its charisma’. It will only prove credible, of course, if it solves its internal problems of solidarity, cohesion and strength, but it has hesitated on the question of solidarity and the idea of everyone pulling together, Ortega adds.

Most global crises, even severe ones, do not fundamentally change — and rarely reverse — the course of world politics. Crises more often serve as accelerators, highlighting existing fissures and widening them. Just as patients with underlying conditions are more vulnerable to the disease, pre-existing geopolitical fault lines will likely be exposed, according to Philip H. Gordon, Senior Fellow in U.S. Foreign Policy at the Council on Foreign Relations, and Jeremy Shapiro, director of research at the European Council on Foreign Relations.

From this point of view, the transatlantic relationship should definitely self-isolate. The pandemic did not create the tensions within the relationship or within the European Union, but it has clearly reinforced them, they write for War on the Rocks.

But now is the time for all democracies to stand together and for American leadership to shine, argue Heritage Foundation vice president James Jay Carafano, and Ian Brzezinski, a senior fellow in the Atlantic Council’s Scowcroft Center for Strategy and Security. A U.S.-European Partnership Recovery Program would signal to the world that the transatlantic community is coming back stronger than ever, they write for the Hill: 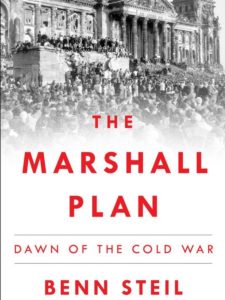 We’re not talking about a second coming of the Marshall Plan. After World War II, Europe was in shambles. That is not the case today.  Both continents have vibrant private sectors, centers of innovation and unmatched potential. We will not be starting from scratch.

Rather, the U.S-European Partnership Recovery Program would focus international energy and attention to leverage the capabilities of existing institutions, ongoing initiatives and the private sector. Participating governments would spearhead the program by eliminating red tape and making strategic investments. The Blue Dot Network initiative could serve as a useful guide to investments.

With Covid-19, the world has been reminded once again that it is entering a new era of great power competition, not least as China’s regime has spread propaganda and disinformation to hide how the disease emerged and spread, the Henry Jackson Society adds.

HJS invites you to an online panel discussion to look at China’s revisionist expansion, the United States’ response, and the way in which European countries are positioning themselves. The discussion will also look at how the United States, United Kingdom, countries of the European Union and Canada could work together to uphold the rules-based international system.