Taiwan is a frontline state with experience in resisting China’s attempts to erode democracy, observers suggest.

“Taiwan is crucial. If it can hold on, other democracies will be able to hold on. But if it falls, there will be no security for the democratic governments of the world,” Wu cautioned.

Both Russia and China have adopted broadly similar political warfare strategies to increase their influence, including “gray zone” techniques for reshaping peripheries, said Aaron Friedberg, professor of politics and international affairs at Princeton University. But Beijing is playing “a deeper, longer-term game,” he said, citing China-funded university professorships, research programs and Confucius institutes, and efforts to partner with think tanks, and to buy Western media outlets. 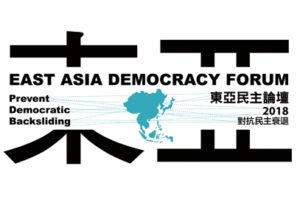 “In some cases, working through various intermediaries, it (China) has also evidently provided support to current and aspiring political leaders in the West,” Friedberg said. “The aims of all these activities are first and foremost to anesthetize the West.”

“Taiwan is one of the most vibrant and successful democracies of the Third Wave of global democratization,” according to Stanford’s Larry Diamond, co-editor of Taiwan’s Democracy Challenged: The Chen Shui-bian Years, (with Yun-han Chu and Kharis Templeman) which details Taiwan’s democratic performance from 2000-2008.

Nevertheless, the forum added, the greatest threat to Taiwan’s place among the world’s liberal democracies now appears to be external, not internal: the country’s long-term future as a democracy is imperiled by China’s rise. But there are grounds for cautious optimism regarding the growth of democracy in mainland China, former Taiwanese president Ma Ying-jeou told the forum:

According to Ma, a growing Chinese middle class will contribute to calls for greater freedoms. Specifically, he explained that he believes 70 to 80 percent of citizens need to be of the middle class in order for democratic movements to gain momentum. Currently, 30 to 40 percent of China’s population is middle class. “I don’t believe that…people [who are] well-educated [and] well-fed do not want to participate in public affairs,” Ma said.

Over the past decade, the Chinese economy has continued to grow, consumer choices have expanded, and the CCP has tightened its vice-like grip on power. But while China’s political horizons have narrowed, Taiwan’s democracy has bloomed — and that has made the island nation harder and harder for Beijing to understand, Stanford University’s Kevin Fan Hsu wrote for Foreign Policy (December 2017):

When Taiwan became a democracy but was still dominated by the Kuomintang, a party the Communists had long dealt with, China could manage. However, today’s vibrant and participatory society in Taiwan confuses and dismays the CCP.

But Beijing’s habitual apoplexy isn’t simply reactive — it’s also strategic. By making every single item a line in the sand, China slowly squeezes Taiwan’s room for maneuvering. In going nuclear over minor matters, the People’s Republic of China has unilaterally changed the rules of its diplomatic game with Taiwan.

For years, most analysts in the United States generally accepted the idea that Taiwan’s status as a de facto independent democracy was unsustainable as China’s economy and military rose to dominate Asia, writes John Pomfret, a former Washington Post bureau chief in Beijing:

Statesmen such as the late Singaporean leader Lee Kuan Yew and Henry Kissinger both predicted that Taiwan’s unification with China — under Chinese terms — was inevitable. Hastening this trend was the sense among many senior U.S. officials that Taiwan was more a roadblock to Washington’s smooth relations with Communist China than an asset in their ideological competition with an authoritarian Beijing.

However, in recent years, U.S. analysts and officials, bucking the view that China’s rise will never end, have begun to question the assumption that China is going to absorb the island. Two recent scholarly articles are indicative of this new trend. Both Denny Roy , a senior fellow at the East-West Center in Honolulu, and Michael Beckley, a professor of political science at Tufts University, doubt whether China has the capacity and even the will to take over Taiwan.

A recently published survey found that up to 86% of Taiwanese young people supported the democratic political system and 70% of Taiwanese would fight if the mainland invaded, a report adds:

According to Hsu Szu-chien, president of the Taiwan Foundation for Democracy, the results of the survey also revealed that “the more people are committed to democracy, the more they are willing to defend Taiwan” should the mainland decide to take the island by force. “That means, defending Taiwan [against China] is to defend our democracy,” Hsu was quoted as interpreting the survey findings in a press conference last week. Other surveys and many key events confirm such trends and views.