How do you effectively govern a country that’s home to one in five people on the planet, with an increasingly complex economy and society, if you don’t allow public debate, civil activism, and electoral feedback? How do you gather enough information to actually make decisions? And how does a government that doesn’t invite its citizens to participate still engender trust and bend public behavior without putting police on every doorstep? analyst Christina Larson asks in the MIT Technology Review.

For any authoritarian regime, “there is a basic problem for the center of figuring out what’s going on at lower levels and across society,” says Deborah Seligsohn, a political scientist and China expert at Villanova University in Philadelphia.

Since becoming general secretary of the Chinese Communist Party in 2012, Xi has laid out a raft of ambitious plans for the country, many of them rooted in technology—including a goal to become the world leader in artificial intelligence by 2030 [and] for “cyber sovereignty” to enhance censorship and assert full control over the domestic internet.

“No government has a more ambitious and far-­reaching plan to harness the power of data to change the way it governs than the Chinese government,” says Martin Chorzempa of the Peterson Institute for International Economics in Washington, DC. 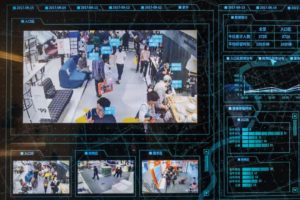 Observers fear that China’s growing international influence will facilitate the expert or spread of its oppressive domestic methods and apparatus, such as the Social Credit System – also translated as “trust” or “reputation” system –  which lists among its goals the “construction of sincerity in government affairs, commercial sincerity, and judicial credibility,” Larson adds – aka political conformity and docility.

“The idea of social credit is to monitor and manage how people and institutions behave,” says Samantha Hoffman of the Mercator Institute for China Studies in Berlin. “Once a violation is recorded in one part of the system, it can trigger responses in other parts of the system. It’s a concept designed to support both economic development and social management, and it’s inherently political.”

“It’s not the technology that created the policies, but technology greatly expands the kinds of data that the Chinese government can collect on individuals,” says Richard McGregor, a senior fellow at the Lowy Institute and the author of The Party: The Secret World of China’s Communist Rulers. “The internet in China acts as a real-time, privately run digital intelligence service.”

All around the world, authoritarian governments are interfering with the institutions of democratic societies in ways that would have been unthinkable even during the Cold War, according to the National Endowment for Democracy’s Christopher Walker, Shanthi Kalathil, and Jessica Ludwig. Policymakers within democracies need to grapple with the challenge of repelling outside influence while upholding essential democratic values, they write for Foreign Affairs.

The challenge of Beijing’s Confucius Institutes – an instrument of the regime’s sharp power – shows that as a Communist-Leninist country, China takes propaganda more seriously than most democratic nations (many officials still haven’t taken to heart the advice to translate “propaganda” as “publicity”), analyst Mitchell Blatt writes for The National Interest.

Democratic forces in Hong Kong are in the eye of the storm, but Taiwan, which is one of Asia’s most liberal democracies, has the most to lose, adds Larry Diamond, Senior Fellow at the Hoover Institution’s Center on Democracy, Development & the Rule of Law. As China’s military modernization speeds forward, along with its continuing efforts to deprive Taiwan of the ability to participate in international affairs, there is keen awareness here of the gathering danger, he writes for The American Interest:

Hence, President Tsai Ing-wen is carefully avoiding provoking the PRC government, at the same time that she increases defense spending and pushes a “Go South” policy to expand trade and investment with Southeast Asian nations and thereby reduce economic dependence on Beijing. Increasingly, though often discreetly, she is getting a sympathetic reception in the region and beyond. For it is not only Asia’s democracies that are alarmed. From Singapore to Vietnam, authoritarian regimes as well feel their sovereignty under pressure and their national security at risk.

“Those who value democracy in this region—and even many who don’t—are desperate for a counterweight to the rise of a new authoritarian superpower, and they know that can only come from the world’s other superpower,” argues Diamond.

Democracy’s advantage in the wake of the Soviet Union’s collapse was that it appeared to have proven itself the least bad of the available options, notes Timothy Shenk, a postdoctoral fellow at Washington University in St. Louis, a Carnegie Fellow at New America, and an editor at Dissent. According to David Runciman’s How Democracy Ends, this is no longer the case. What he calls “pragmatic twenty-first-century authoritarianism” has found a new way of satisfying demands for economic prosperity and political recognition, Shenk writes for The New Republic:

Compare authoritarian China with democratic India. Today, China’s per capita GDP is nearly five times higher than India’s, its poverty rate is half as large, and the average person’s lifespan is longer. As for political recognition, there’s the pride that comes from being part of a nation whose success is envied around the world. Whether the balance the Chinese government has struck is sustainable remains to be seen, but, for now, young democracies with low standards of living have an attractive alternative to consider.