For much of the last decade, China and Russia have been waging political warfare against the West – and we simply didn’t notice, says the co-editor of a new analysis. The Art of Deceit: How China and Russia Use Sharp Power to Subvert the West, a report from The Henry Jackson Society and Konrad Adenauer Stiftung, details how Beijing and Moscow’s operations threaten three pillars of Western democracies; a pluralistic politics, free media, and academia.

Europe is at the center of two defining trends in international politics today: renewed great power competition and the resurgence of global authoritarianism, according to Jessica Brandt, the Head of Policy and Research at the German Marshall Fund’s Alliance for Securing Democracy and Torrey Taussig, a Research Director at the Harvard Kennedy School’s Belfer Center of Science and International Affairs and a Nonresident Fellow in the Center on the United States and Europe at the Brookings Institution.

Migration, the rise of extreme nationalism, Brexit, and fractured ties with the United States all increasingly make European countries more vulnerable to Russian and Chinese authoritarian influence—a spectrum of overt and covert activities that range from benign state tools such as public diplomacy to more malevolent efforts including direct interference in electoral processes—that presents a growing set of challenges to European cohesion and stability, they write in Europe’s Authoritarian Challenge, an article for The Washington Quarterly:

Russia sees European democracy, prosperity, and particularly the European security order as inherently aimed at weakening Russia. Putin has, therefore, taken steps to expedite its decline. China, on the other hand, prefers a stable Europe that can serve as a trading partner, albeit a fractured one willing to operate on Chinese terms. Despite differing capabilities and tolerance for risk, Russia and China share underlying objectives in Europe: undermine democratic norms, weaken European institutions and cohesion, and capitalize on fissures in the transatlantic relationship. Their strategies are carried out at the expense of free and open societies, but Europe has been slow to forge a coherent counter-strategy. 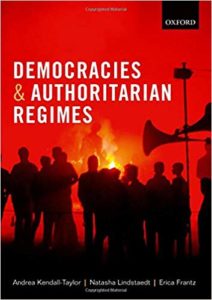 Democracies and Authoritarian Regimes, by Natasha Lindstaedt, Andrea Kendall-Taylor, and Erica Frantz, provides a broad, accessible overview of the key institutions and political dynamics in democracies and dictatorships, enabling students to assess the benefits and risks associated with democracy, and the growing challenges to it, says Kendall-Taylor, Senior Fellow and Director, Transatlantic Security Program at the Center for New American Security.

In recent years, China’s ability to control information has grown stronger under President Xi and new artificial intelligence (AI) technologies, and it is now going global, they observe:

According to the National Endowment for Democracy’s Shanthi Kalathil, China attempts to harness global information ecosystem “through a combination of market-oriented mechanisms, propaganda, pressure tactics, and action in international arenas.” Kalathil adds that such mechanisms include shaping international news media, guiding discussions around global internet norms, and influencing culture through Hollywood.

In the years ahead, effective counter-strategies to these channels of authoritarian influence will demand a more cohesive and strategic response from Europe, Brandt and Taussig conclude. But to defend democratic institutions and values at home, European policymakers and the public must first cut through the myriad of Russia’s and China’s distinct economic, political, information, and cyber tools of engagement to see the cumulative and detrimental effects they are having on European democracy. RTWT