The “Vegas rule” — what happens in a single nation stays there — “does not apply in today’s global world,” according to Council on Foreign Relations president Richard Haass. Greenhouse gases, economic downturns and extremist ideologies, to name just three examples, respect no borders and defy the best efforts of nations to insulate themselves, he writes in The World: A Brief Introduction. 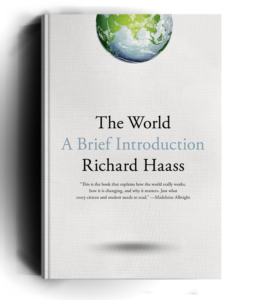 Haass mostly emphasizes grim developments like declining support for democratic institutions, rapidly growing global inequality and the resurgence of great power rivalries as China and Russia assert themselves, notes University of Texas professor Mark Atwood Lawrence, the author of the forthcoming “In the Shadow of Vietnam: The United States and the Third World in the 1960s.” It’s hard to argue with his prediction of “accelerating global disorder” in the years ahead, he writes for the Times:

The American-led world order delivered broad prosperity, geopolitical stability and democratization for more than half a century. Perhaps the United States can reclaim something of its accustomed role, to the benefit of all. But Haass passes too quickly over some of the impediments to realization of such a vision. Does the United States any longer possess either the material strength or international appeal to claim a leadership role?

A systematic comparison of the West’s reactions to the movements in Ukraine and Armenia demonstrates that democratic states are inconsistent in their efforts to advance democracy, recent research from LeHigh University suggests. The two cases were very similar on most dimensions, yet the outcomes could not have been more different. If ideology drove the policy in Ukraine, why did it not do the same in Armenia? asked Arman Grigoryan, a faculty member in the Department of International Relations.

“Democracy has been supported when such support has dovetailed with certain material interests—geopolitical, economic, or corporate—and never when such interests have diverged from the liberal preference for democracy,” says Grigoryan.

Which also explains why non-governmental groups which do not face potentially conflicting imperatives of national security, trade, diplomacy, and the like, can be more focused and consistent in advancing democracy.