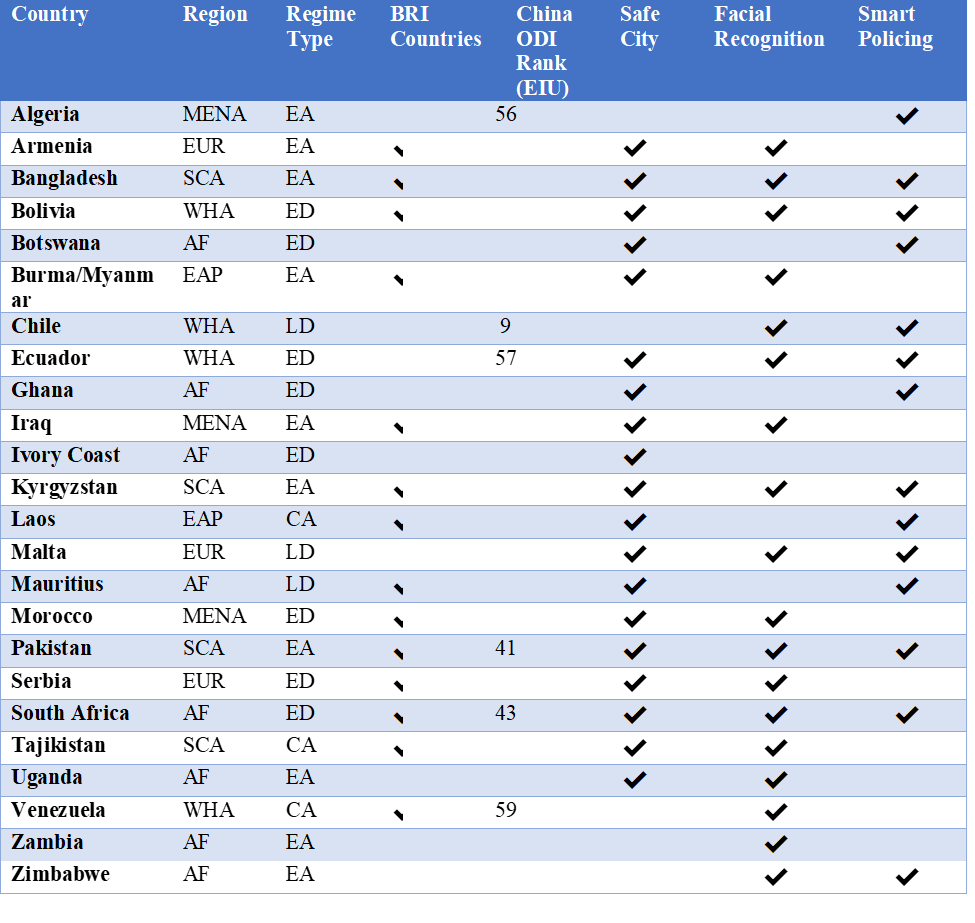 China’s efforts vary by country, local context, and its own interests, argues Steven Feldstein, Chair of Public Affairs at Boise State University, and a nonresident fellow at the Carnegie Endowment’s Democracy, Conflict, and Governance program:

As Cornell scholar Jessica Weiss observes, “The diffusion of digital authoritarianism is not the same thing as an intentional effort to remake other governments in China’s image. Although these systems can help governments monitor and control their people, how exactly they are used depends on local politics.” This remains a hotly debated issue in the policy and research communities. Experts such as Elizabeth Economy push back and assert that China is seeking to export a “variant of authoritarian capitalism.”

Using data collected in a recent Carnegie report, Feldstein found that in 24 countries worldwide, Chinese firms appear to be the primary suppliers of AI surveillance technology (see Appendix above).

It would be an oversimplification to see the rise of facial recognition technology as the consequence of a Chinese strategy to export its surveillance apparatus, argues Carly Kind, the Director of the Ada Lovelace Institute @carlykind. As countries consider whether to draft new laws to tame this rapidly advancing technology, they are likely to encounter at least three major policy challenges, she writes for Chatham House, the UK-based foreign policy think-tank:

But China is not the only country engaged in spreading the technologies and techniques of digital authoritarianism, he writes for War On The Rocks. RTWT

The Islamic Republic has invested significant resources and accumulated vast experience in the conduct of digital influence efforts, according to a new Atlantic Council report, “Iranian Digital Influence Efforts: Guerrilla Broadcasting for the Twenty-First Century,” by Emerson T. Brooking and Suzanne Kianpour. Three conclusions can be drawn about the nature of Iran’s modern propaganda apparatus, the report notes:

Additionally, five steps can be taken to meet this threat, the report adds…RTWT

The rapid proliferation of censorship and surveillance technology around the world is threatening human rights, the NED’s Center for International Media Assistance adds (see below). Authored by Open Technology Fund Information Controls Fellow Valentin Weber, a recent research report tracks the export of Chinese and Russian censorship and surveillance technology, providing fresh insight into the importance of telecommunications infrastructure to modern authoritarianism.