The war in Ukraine is a vivid real-time reminder of the urgency of the task of modernizing and reinvigorating approaches and efforts to advance freedom around the world, according to Mark Andrew Green and Kenneth Wollack, co-chairs of the Ronald Reagan Institute’s Westminster 2.0 Working Group.

Tasked with updating the strategy outlined in Reagan’s speech, the group developed a set of recommendations for how to develop the necessary strategy, tools, and resources, they write for RealClearPolitics:

In addition to the powerful rhetorical impact of President Reagan’s Westminster address, the speech motivated policy change, TSNR’S War On The Rocks adds: Less than a year after the speech was delivered, the U.S. Congress approved the formation of the National Endowment for Democracy (NED) to aid democracy movements abroad. In this week’s episode of Horns of a Dilemma, Clements Center Executive Director (and TNSR Editor in Chief) Will Inboden discusses the speech and its legacy with Rachel Hoff, policy director of the Ronald Reagan Presidential Foundation and a former NED Penn Kemble fellow.

So, what would today’s equivalent of Reagan’s call to democratic arms look like? British MP Richard Graham asks in PoliticsHome. The UK Foreign Secretary’s speech on the Network of Liberty reflected many of the key ingredients. Her four pillars of security, trade, investment, and technology alliances recognize one of our great collective modern failures – not providing young democracies with infrastructure funding to boost open and prosperous economies.

Reagan advocated for assistance to foster the infrastructure of democracy—a free press, civil society, political parties, and universities—a call that led to democracy assistance as we know it, USAID’s Samantha Power observed in a keynote address. It helped transform countries locked behind the Iron Curtain into proud, thriving members of a free Europe and helped nascent democracies in Asia, Africa, and Latin America develop sustainable democratic institutions. 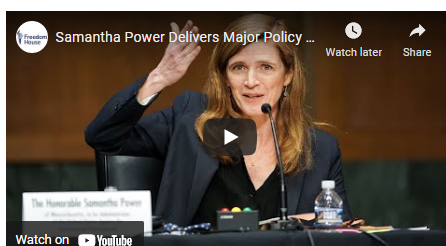 In the throes of the Cold War, when the American political and academic establishments almost in their entirety took for granted the continued strength and global influence of the Soviet Union, Reagan turned Marxist revolutionary theory on its head, Joseph Loconte writes for National Review.

Ukraine has taken up the challenge which Reagan laid down 40 years ago, on its own behalf. If the West does not help Ukraine enough, it risks losing its gains from victory in the Cold War – not to mention the grain needed to feed the world, The Telegraph’s Charles Moore writes:

Although Communism has never regained its hold on the continent of Europe, the situation may be worse now than then. Vladimir Putin may not believe in Marxism-Leninism, but he has as little respect as Stalin for the independence of free countries. He shares Stalin’s obsession with controlling places he chooses to regard as Russian even when international law and democratic opinion say otherwise. He borrows Stalin’s methods – the shooting, bombing, rape, starvation and torture of civilians, deportation, using prisoners as hostages, puppet regimes and the looting of grain.

IRI created a commemorative video (below) to mark the Westminster anniversary and to illustrate that President Reagan’s remarks are as relevant today as 40 years ago.

Our work to strengthen democracy & counter authoritarianism is as critical today as it was 40 years ago when President Reagan delivered his Westminster Speech. Thank you @ReaganInstitute & @RogerZakheim for a great discussion yesterday. #StandWithUkraine https://t.co/JWDLxTEDJL pic.twitter.com/88pgrtiqtx