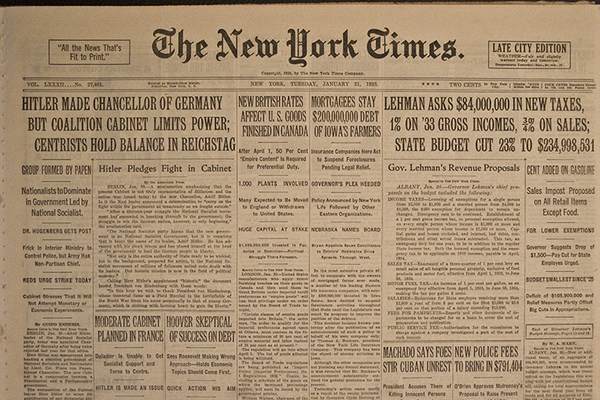 For one of Brazil’s top judges, a wave of increasingly aggressive rallies by supporters of President Jair Bolsonaro demanding that the military shut down congress were the last straw, The FT reports. The country risked becoming an “abject dictatorship” under the rightwing populist’s leadership, he warned.

“We must resist the destruction of the democratic order to avoid what happened in the Weimar Republic when Hitler, after he was elected by popular vote, did not hesitate to annul the constitution and impose a totalitarian system in 1933,” said Justice Celso de Mello in a WhatsApp message leaked to the media. 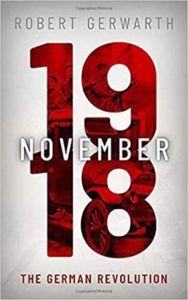 Yale historian Timothy Snyder cautions in his book, On Tyranny: Twenty Lessons From the Twentieth Century, against those who ” today are no wiser than the Europeans who saw democracy yield to fascism, Nazism, or communism in the twentieth century. Our one advantage is that we might learn from their experience.”

The historian Benjamin Carter Hett, in his gripping account of Hitler’s rise to power, The Death of Democracy (2018), claims that, “in many ways, our time more closely resembles the 1930s than it does the 1990s,” Morten Høi Jensen writes for The Point:

In a recent article in Public Seminar titled “America’s Weimar Moment,” the journalist and intellectual historian (and my former professor at the New School for Social Research) James Miller warns Democratic voters against making the same mistake liberals and socialists made in Germany in 1933: allowing areas of disagreement to cloud our shared goal of preventing an authoritarian from winning the election.

“Increasing cultural, social and political continuities between Weimar and America should give us serious concern in assessing the fate of these two democracies as part of an analogous historical phenomenon,” according to historian Frank Domurad, author of Hometown Hamburg:  Artisans and the Political Struggle for Social Order in Weimar Germany.

But if history teaches, it provides few lessons – at least any that are directly transferable to current challenges. 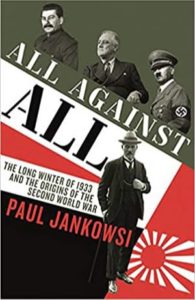 European history between the two world wars contains two traps for the unaware, according to the FT’s Tony Barber writes in a review of two books on the ill-fated democracy of the Weimar Republic – November 1918: The German Revolution, by Robert Gerwarth, and All Against All: The Long Winter of 1933 and the Origins of the Second World War, by Paul Jankowski:

In its first four years of its life the Weimar Republic fought off numerous challenges to its stability, emerging by 1923 in a condition where “the failure of democracy would have seemed far less probable than its consolidation”, writes Gerwarth, professor of modern history at University College Dublin.

In contrast to 1918, after 1945 a progressive transformation occurred across Western Europe, the author of Democracy and Dictatorship in Europe: From the Ancién Regime to the Present Day. contends. The tragedy of the interwar years and the Great Depression led to a unified belief on both sides of the Atlantic that a new order capable of ensuring economic prosperity and social stability was necessary for democracy to succeed in Europe. This consensus led to extraordinary efforts to change political and economic dynamics at the international, regional, and domestic levels, she writes for Foreign Policy.

Germany’s Center Party remained one of the few stalwarts of democracy in the troubled Weimar state, argues Michel Gurfinkiel, the former editor in chief of Valeurs actuelles. European Christian Democracy remained robust in part due to the Catholic Church’s heavy investment in civil society, he writes for First Things: 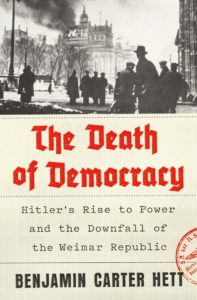 Christian parties built up a host of ancillary organizations, from school networks to publishing houses and media, from youth movements (including the Scouts) to sports clubs, from guilds to trade unions. This civic dimension gave them a decisive advantage against secular liberals (whose main civil society institution was freemasonry) and, perhaps more importantly, against the socialists, who presented themselves as champions of the growing industrial working class. The Christian trade-union movement, which gained ground throughout Europe in the 1880s, competed with the more powerful Marxist and social-­democratic unions, and even managed to attain dominance among some laborers, such as the miners of Northern France or the skilled workers in the Ruhr.