Democracy and its advocates are undergoing an existential crisis as authoritarian resurgence externally and illiberal challenges at home seek to undermine the values and institutions underpinning the liberal international order, writes Lynn Lee, Associate Director for Asia at the National Endowment for Democracy (NED). The fact that President Biden made democracy an important priority for his administration is also significant, as the Summit for Democracy served as a timely opportunity to unpack aspects of the crisis in a constructive way and amplify the critical issues on our agenda, she told a recent CSIS event on “Enhancing Democratic Partnership in the Indo-Pacific Region” (above).

December’s Summit initiated a Year of Action that will lead to a second, in-person event a year from now, creating an opportunity to motivate and engage democrats around the world to imagine the possibilities if we came together in support of democracy and to defend liberal norms and values. Threats to democratic institutions, values and norms are manifest around the world, from Brazil, Hungary, and the US to the Philippines and Turkey. The last decade has shown how even the most established, mature democracies are vulnerable. We must defend, mend, and bolster the many aspects of democracy, and remain vigilant in recognizing that democracy and human rights should never be taken for granted. 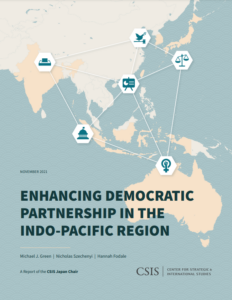 Democratic states in the Indo-Pacific region can leverage the Summit to explore how they can cooperate to maintain an order anchored in rule of law, transparency, media freedom, and respect for human rights and dignity. Through the Sunnylands Initiative, launched in January 2020 by CSIS, NED, and the Annenberg Foundation Trust, prominent democracy and thought leaders in the US and Indo-Pacific have explored how the region’s democratic states can collaborate or coordinate efforts to protect liberal democracies and strengthen the rules-based international order that has been the foundation for peace in the region. Building on the Summit’s momentum, I propose three action items for the Sunnylands Initiative as well as US stakeholders in the region to consider for the Year of Action and beyond:

This blog post is based on remarks prepared for a CSIS moderated panel discussion (above), which focused on reactions to the first Summit for Democracy, the role of the US in supporting democratic partnership in the region, and potential actions Sunnylands Initiative partners can prioritize during the “Year of Action” leading up to the second Summit for Democracy in December 2022.