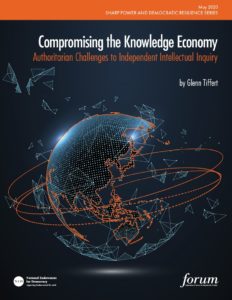 In light of growing concern about malicious disruption during the global crisis, the United Nations’ Open-Ended Working Group (OEWG) is playing a leading role in further developing a common framework for responsible behavior in cyberspace, notes Josh Gold, a research assistant at Citizen Lab, at the University of Toronto’s Munk School. The OEWG is the world’s only intergovernmental forum open to all countries for deliberations on how to ensure a peaceful and secure cyberspace, he writes for the Council on Foreign Relations.

A strongly-worded Dutch paper [PDF] states that “The Netherlands is appalled by the abuse of the COVID-19 crisis by States to conduct or effectively control non-state actors in launching cyber operations.” The Dutch government labels such operations “deplorable examples of irresponsible state behavior,” he adds.

Recent developments in the knowledge economy—intensifying marketization, the rise of online platforms, and populist critiques of the authority and legitimacy of many bodies of knowledge—have impinged upon the robust and open competition of ideas that democratic societies depend on for renewal, according to a new report.

Assaults on intellectual freedom in authoritarian settings start at home, but their reach is increasingly global, analysts Glenn Tiffert writes in “Compromising the Knowledge Economy: Authoritarian Challenges to Independent Intellectual Inquiry,” by the latest in the Sharp Power and Democratic Resilience series, from the NED’s International Forum:

Tiffert explores the compromising effects of sharp power on the civil society institutions that democratic societies depend on for knowledge production, including universities, publishers, and think tanks.