While Russian President Vladimir Putin celebrates 20 years in the Kremlin and poses as a powerful world leader, his Russian Federation is showing increasing signs of fracture, according to Janusz Bugajski, a senior fellow at the Center for European Policy Analysis (CEPA). Although a Ukraine-type revolution in Moscow to overthrow a corrupt authoritarian regime seems unlikely, a revolt of Russia’s diverse regions against a despised central government is gathering momentum, he writes for The Hill:

During the past year, mass protests have grown in size and frequency, whether against dumping Moscow’s trash in the northern Arkhangelsk and Komi regions, economic exploitation and curtailment of the national language in Tatarstan and other republics, the building of Orthodox cathedrals in Siberia’s Krasnoyarsk region, the falsification of elections in Buryatia, the appointment of outsiders as governors in Kalmykia and other republics, the arbitrary changes of borders between Chechnya and Ingushetia or growing ethnic tensions in Dagestan fueled by unpopular government decisions. 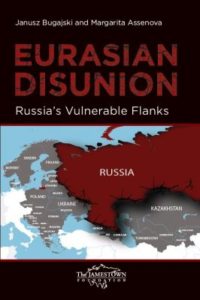 In the closing days of 2019, Russian president Vladimir Putin defended the Nazi-Soviet pact of August 1939 and blamed the outbreak of the second world war on alleged collusion between Adolf Hitler and European governments, including that of Poland. […]There is, however, a larger context to Mr Putin’s weaponizing of history, Tony Barber writes for The Financial Times (HT:FDD).

Putin’s primary aim in his recent extraordinary claim that Poland caused World War II really is what it seems to be: the undermining of the status and position of Poland itself, analyst Anne Applebaum writes for The Atlantic:

It is the largest and most important of the Eastern European NATO members, with the biggest army and the most serious economy; the country that originally proposed the European trade treaty with Ukraine—the treaty that led to protests, and the pro-Russian president’s abdication, in 2014; the country that argued for more than a decade against the Nord Stream 2 Russian-German pipeline, now stopped by U.S. sanctions. Why wouldn’t Putin want to undermine and destabilize Poland’s position?

By doing so, he undermines and destabilizes the whole post–Cold War settlement. And that, of course, has been the central goal of his foreign policy for two decades, adds National Endowment for Democracy board member Applebaum, a senior fellow of the Agora Institute at Johns Hopkins University, whose latest book is Red Famine: Stalin’s War on Ukraine.

As public trust in President Putin, 67, slumped to a near-record low last year, diminutive shaman, Alexander Gabyshev (above), set out from his home in Yakutia, a vast frozen region in northeastern Siberia, to walk almost 5,000 miles to the Kremlin, where he would, he proclaimed, “exorcise” Mr Putin and bring democracy to Russia, Marc Bennetts writes for the (London) Times.

“Vladimir Putin is the enemy of all humankind,” he said, clutching a ceremonial sword as long as his arm. “He is a demon. He is the antichrist.” …Although the march was eventually halted by the authorities, his quixotic crusade became a peculiar yet potent symbol for simmering nationwide discontent prompted by extensive poverty and…RTWT

The arrest of a Russian businessman, now an opposition politician, head of the Yukos company Mikhail Khodorkovsky on October 25, 2003, may have been the result of a report sent to Moscow from the U.S. by the Russian spies who were part of the Illegals Program, notes analyst Kseniya Kirillova. This conclusion can be made on the basis of the book “A Woman Who Can Keep Secrets,” published by one of the intelligence agents exposed in 2010, retired colonel of the SVR, Elena Vavilova, she writes for Homeland Security Today.

The former Russian oligarch’s many contradictions, from his days bilking millions of citizens in the days after the Berlin Wall fell to his run as the richest man in Russia to his 10 years in a Siberian prison and his current status as an exiled Putin foe and champion of democracy, are the subject of Alex Gibney’s new documentary “Citizen K,” The Aspen Times adds.

“To hear Vladmir Putin tell it, Mikhail Khodorkovsky is a villain in a real-life gangster movie,” Gibney narrates early in the film. “But to Putin’s opponents, Khodorkovsky’s 10 years in a Siberian prison made him a hero for the cause of human rights and democracy. Now out of prison, Khodorkovsky is looking for a third act.”