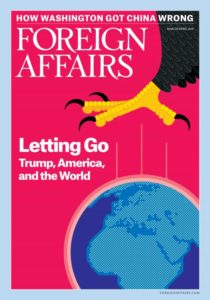 The quarter century following the Cold War was the most peaceful in modern history. Then history began to change course, notes Michael Mandelbaum. Christian A. Herter Professor Emeritus of American Foreign Policy at the Johns Hopkins School of Advanced International Studies. In the last several years, three powers have launched active efforts to revise security arrangements in their respective regions, he writes for Foreign Affairs:

Russia has invaded Crimea and other parts of Ukraine and has tried covertly to destabilize European democracies. China has built artificial island fortresses in international waters, claimed vast swaths of the western Pacific, and moved to organize Eurasia economically in ways favorable to Beijing. And the Islamic Republic of Iran has expanded its influence over much of Iraq, Lebanon, Syria, and Yemen and is pursuing nuclear weapons…. 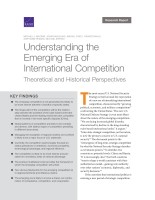 At this point, all three revisionist regimes rely for domestic support on nationalist hostility to the United States specifically and Western democracies more generally and reject being part of a U.S.-led coalition. Fortunately, Russia is much weaker than the Soviet Union, China is restrained by both deterrence and the knowledge that military conflict would damage its economy, and Iran is a regional power. So the United States can afford to pursue the containment of all three simultaneously (so long as it does so as part of robust coalitions).

Constructive regime change, for example, especially the advent of democracy, would alter the foreign policy orientations of the revisionist powers. Such a change would have to come about through internal processes and is unlikely to happen anytime soon, adds Mandelbaum, the author of The Rise and Fall of Peace on Earth (Oxford University Press, 2019):

Still, none of the regimes can be confident of its longevity; repeated outbreaks of political turbulence over the years have shown that each faces significant domestic opposition, maintains itself in power through coercion, and fears its people rather than trusts them. Situations like that can shift rapidly. A well-executed policy of containment could increase the chances of disruption by creating an external context that would encourage it. But when or, indeed, if it would bear fruit is impossible to predict. RTWT