Justin Trudeau has warned that China is “play[ing] aggressive games” to undermine democratic institutions amid reports Beijing actively interfered in Canada’s federal elections. His comments on Monday came after a news report that Beijing had funded a “clandestine network” of candidates in Canada’s 2019 election and just days after the federal police force said it was actively investigating a secret network of illegal Chinese “police stations” in Toronto, the Guardian reports.

“There’s no question about the shift both in political rhetoric and in action and in also the appointment of the team,” said Minxin Pei, a board member of the National Endowment for Democracy (NED), who said he believes that Mr. Xi’s leadership lineup shows that he does not value expertise in managing a market-oriented economy. “He values people who can implement his policy regardless of the economic consequences.”

The good news is that China’s favored narrative about the superiority of autocracies is being undermined by Xi Jinping’s faltering economy, “wolf warrior” diplomacy and unpopular domestic crackdowns, Taiwan’s first digital minister Audrey Tang tells the Post’s Josh Rogin. Democracies such as Taiwan, Ukraine and the United States are “natural allies” in fighting China’s cyberwarfare strategy, Tang said, but they must do more to prove that their model can work better in a digital world.

“This is not a transaction (in exchange of Lithuania allowing opening of the office)”, said Eric Huang, head of Taiwan’s representative office. “It is because Taiwan would like to work with Lithuania together to strengthen the resilience of our democratic supply chain in the face of coercion by autocracies”.

This shows democratic solidarity in action, NED President and CEO Damon Wilson tweeted. Democracy as strategy means not only supporting democratic advocates around the world; it’s also about democracies having each others’ backs.

This shows democratic solidarity in action.

Democracy as strategy means not only supporting democratic advocates around the world; it’s also about democracies having each others’ backs.

Any hopes that China would adopt a new pandemic strategy were crushed on Saturday when officials vowed to stick to a zero-COVID policy, even as the harsh approach fuels outrage and discontent among the public, Foreign Policy’s Christina Liu adds. Beijing’s adherence to zero-COVID spells continued anguish for Chinese citizens, who have grown increasingly frustrated under nearly three years of forced lockdowns, mass testing, and travel restrictions that have completely upended public life.

The prominent Chinese human rights lawyer Teng Biao and Columbia University Professor Andrew Nathan are teaching an online course in Chinese on the country’s politics and foreign policy. Watch live or catch the sessions on YouTube (above). Register here.

China’s response to the COVID-19 pandemic has featured entrenched patterns of authoritarian control characterized by top-down governance and harsh local implementation, secrecy around scientific data, rigid adherence to policy protocols that have jeopardized vulnerable communities, and pervasive censorship and criminalization of criticism, the Congressional-Executive Commission on China adds. It hosts a hearing on China’s Zero-COVID Policy and Authoritarian Public Health Control: Tuesday, November 15, 2022 – 10:00am.

China, Russia, and other countries ruled by repressive regimes have dramatically scaled up their investment into spheres commonly associated with soft power, including into media, education, technology, and entertainment, adds the European Centre for Populism Studies. Most free societies are still not adequately prepared to meet the multidimensional sharp-power strategies applied by China, Russia, and like-minded states. Open societies will be vulnerable so long as they maintain a blind spot about the compromising and corrosive aspects of such forms of authoritarians’ outward-facing influence.

The European Centre for Populism Studies (Brussels), in collaboration with the Alfred Deakin Institute for Citizenship and Globalization (ADI), and Deakin University (Melbourne), has announced a new Talk Series on the topic of Sharp Power. The opening talk features

Christopher Walker is Vice President for Studies and Analysis at the National Endowment for Democracy (NED). Prior to joining the NED, Walker was Vice President for Strategy and Analysis at Freedom House. Walker has testified before legislative committees, appears regularly in the media, and frequently conducts briefings on critical issues relating to democratic development. He is co-editor (with Larry Diamond and Marc Plattner) of Authoritarianism Goes Global: The Challenge to Democracy (2016), and co-editor (with Jessica Ludwig) of the reports Sharp Power: Rising Authoritarian Influence (2017), and Sharp Power and Democratic Resilience (2021). His article, “Rising to the Sharp Power Challenge,” appears in the October 2022 issue of the Journal of Democracy. 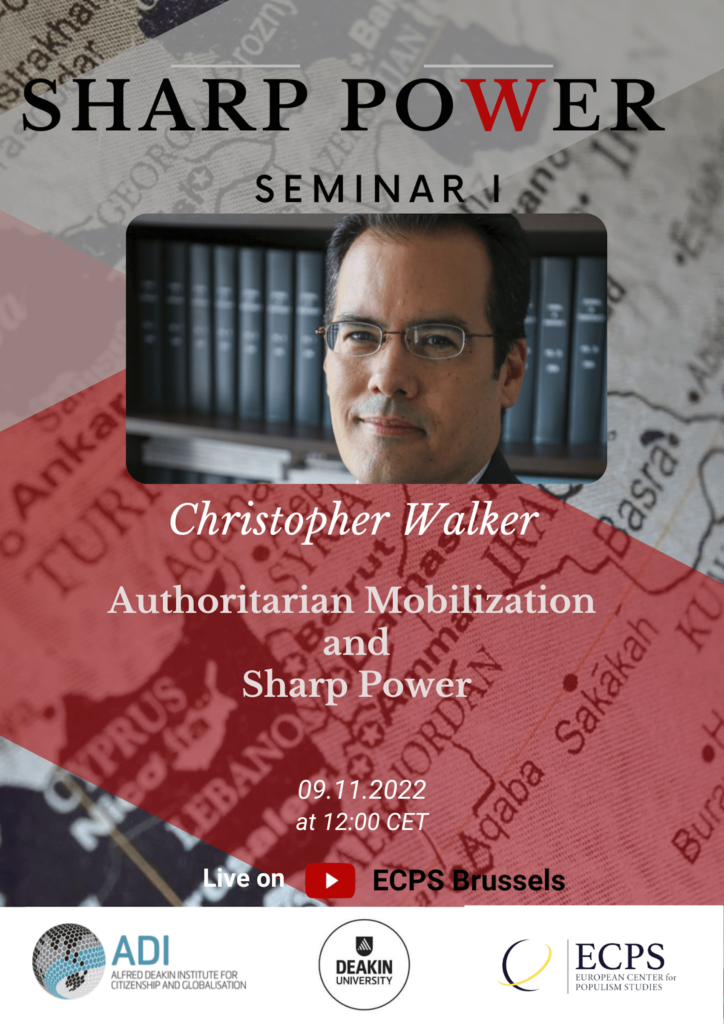