The Biden administration has announced a partnership with Australia, Denmark, Norway, Canada, France, the Netherlands and the United Kingdom to curb authoritarian regimes’ access to potentially repressive technologies.

The Export Controls and Human Rights Initiative, launched at today’s Summit for Democracy, requires member states to align policies on exports of key technologies and respect a voluntary code of conduct to apply human rights criteria to export licenses.

The effort is aimed at combating the rise of “digital authoritarianism” in countries like China and Russia, where software and advanced surveillance technologies have been used to track dissidents and journalists, shape public opinion and censor information deemed dangerous by the government, The Times adds:

While a decade ago the internet was seen as a force for democracy and openness, authoritarian governments today have learned that big data, internet controls, artificial intelligence and social media “could make them even more powerful,” Samantha Power, the administrator for the U.S. Agency for International Development, said at the virtual summit on Friday……

“The United States will take greater responsibility for the digital tools we export,” Power said. “All too often, technology originates in a hub of innovation like the United States and is exported to countries that use that technology to enable human rights abuses,” she added, affirming a US commitment to:

“Authoritarian governments increasingly are using surveillance tools and other related technologies in connection with serious human rights abuses, both within their countries and across international borders, including in acts of transnational repression to censor political opposition and track dissidents,” said a joint statement from Australia, Denmark, Norway and the United States.

There are no guarantees of success. But democracy activists around the world might actually benefit from some of this support. And history shows that such movements can, sometimes, succeed, the Atlantic Council’s Daniel Fried (@AmbDanFried), who formerly served as Special Assistant and NSC Senior Director for Presidents Clinton and Bush, writes for Just Security.

It’s the right thing to make the effort on behalf of those who share the ideals that lie at the foundation of the American nation. Support for such people is what used to be called the American way, adds Fried, a National Endowment for Democracy (NED) board member.

Global interdependence between autocracies and democracies has made open societies vulnerable to authoritarian manipulation in unanticipated ways and the impact can be difficult to measure, said Ronald J. Deibert, director of the Citizen Lab at the University of Toronto’s Munk School. 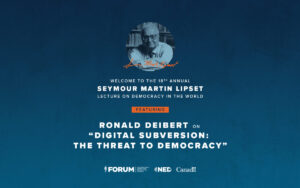 The digital communications environment is invasive by design, fundamentally insecure and open to widespread abuse, he asserted, delivering the NED’s annual Lipset lecture on Digital Subversion: The Threat to Democracy (above). The emotional manipulation machine at the heart of social media is a nearly perfect vehicle for the deliberate spread of lies, he said.

The authorities in China, Russia, Saudi Arabia, Iran, and other authoritarian regimes also leverage emerging technologies such as surveillance and artificial intelligence (AI), as well as strategic investments to undermine democratic principles and human rights abroad.

But democracies possess a critical advantage that autocracies do not—the creativity and solidarity of vibrant civil societies that can help safeguard institutions and reinforce democratic values of openness, accountability, and institutional integrity. Building democratic resilience to authoritarian interference is more critical than ever. Additional resources here.