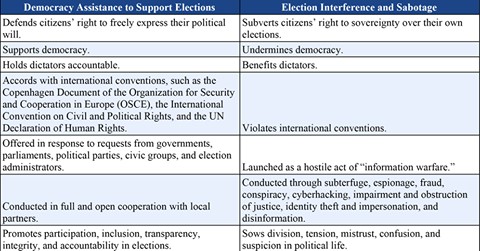 Some observers have argued that election “meddling” by Russia and other authoritarian regimes is acceptable because “everyone does it,” drawing a false comparison with democracy assistance. But advancing democracy has absolutely nothing in common with cyber-hacking and disinformation by authoritarian regimes, who are afraid to hold legitimate elections at home, the National Democratic Institute* notes:

The argument finds support from the leading analyst of democracy assistance.

The U.S. response to Russian meddling in the 2016 election has been extraordinarily weak, notes Thomas Carothers, the Carnegie Endowment’s Senior Vice President for Studies. Not only that, it has been accompanied by an attitude of “whataboutism” on the part of some Americans—the relativistic view that the United States has little ground to complain about Russia’s actions given its own history of meddling in other countries’ political campaigns and elections, he writes for Foreign Affairs:

It is certainly essential to be honest and realistic about the considerable record of past U.S. electoral meddling, and the contrast between Russia and the United States in this domain is certainly not black and white. Yet neither is it one of indistinguishable shades of gray. The United States is simply not engaging in electoral meddling in a manner comparable to Russia’s approach.

“But unlike Russian electoral meddling, U.S. democracy promotion does not seek to exacerbate sociopolitical divisions, systematically spread lies, favor particular candidates, or undercut the technical integrity of elections,” Carothers notes. “On the whole, it seeks to help citizens exercise their basic political and civil rights in electoral processes, enhance the technical integrity of such processes, and increase electoral transparency.”