At a packed advanced screening of the documentary “Revolution of Our Times,” the audience gasped, sniffled and cried throughout the film’s depiction of police brutality and democratic resistance in pre-COVID Hong Kong, Nikkei Asia’s Chris Horton writes. With the Russian war in Ukraine raising concerns here about Taiwan’s preparedness to survive a Chinese invasion attempt, theaters have been full in the film’s first week of release, and social media has been abuzz with discussion of how Taiwan can better prepare itself for the unthinkable. 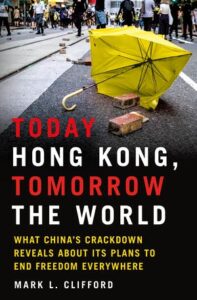 Journalist Mark Clifford’s new book “Hong Kong Today, The World Tomorrow” argues that the erosion of freedoms and human rights in Hong Kong is just the beginning of a greater assault on democracies and freedom worldwide by Beijing, Horton adds.

It’s one of several recently published books that highlight the central importance of conquering Taiwan to Xi Jinping’s plan for China’s national rejuvenation, including “The World According to China” by Elizabeth Economy and “The Long Game: China’s Grand Strategy to Displace American Order” by Rush Doshi. Both are currently members of the Biden administration:

“Appeasing dictators is disastrous,” Clifford said. “If the world refuses to stand for Taiwan, it means surrendering to an expansionist autocratic state which clearly intends to dominate the region.”