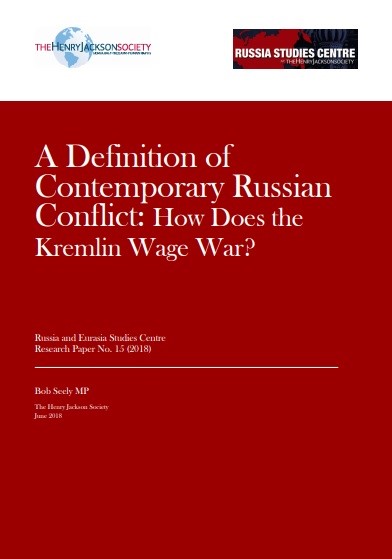 One of the greatest challenges facing democracies is “how to deal with authoritarian states that use the West’s democratic norms and institutions against itself, attempting to take advantage of, and undermine, open societies,” says a new analysis.

“One of the critical problems we face, however, is that there is no common agreement on what we are fighting. One of the reasons for this is that we lack a common definition of what we face,” adds British MP Bob Seely, author of A Definition of Contemporary Russian Conflict, a report from the London-based Henry Jackson Society.

Seely explains why and how Russia it came to adopt the hybrid warfare model, outlining how:

“Contemporary Russian Conflict is based on the ‘Active Measures’ KGB toolkit around which a full spectrum of state tools are mobilized,” the report states. “In ‘Active Measures’, the ‘demoralize’ phase can last years. Indeed, demoralization was seen through the lens of Soviet ideology as part of the generational struggle against capitalism.”

“From fake news aimed at Europe to the propaganda of RT, and from the occupation of Crimea to the streets of Salisbury, Russia is waging a very modern kind of conflict on the West – as well as on the Russian people themselves,” said Seely. “The coming years will test our resilience in multiple ways.”

“Up until now, the West has been without a definition of Russian warfare in all its complexity and sophistication,” said Foreign Affairs Select Committee Chair Tom Tugendhat MP. “Peer reviewed by leading scholars, this paper is a critical element in understanding how Russia and other powers are using often malign influence to achieve their strategic goals.”