The head of Iran’s Revolutionary Guard threatened the U.S. and its allies Monday as he addressed a pro-government demonstration attended by tens of thousands of people denouncing last week’s violent protests over a fuel price hike, AP reports.

Gen. Hossein Salami, echoing other Iranian officials, accused the U.S., Britain, Israel and Saudi Arabia of stoking the unrest. He said the rise in gasoline prices was a “mere pretext” for an attack on the nation.

More than 10 days after Iranians took to the streets in protest to a sudden gasoline price hike, the Iranian government is still overwhelmed by the aftereffects of the unrest and its violent suppression by security forces, Radio Farda adds: 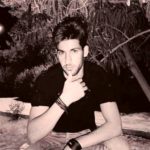 Alireza Adyani, a cleric who is in charge of the police’s political and ideological department, says IRGC and the Basij militia entered the scene to suppress the protests on Sunday November 17 after the police failed to restore order in the streets during the first two days of the protests. He said the situation came under control within 72 hours. Previously IRGC Deputy Commander Ali Fadavi had said: “We had a war for 48 hours.”

Amnesty International said late Monday that at least 143 people have been killed in the protests since Nov. 15, updating an earlier toll. The London-based rights group said it had “clear evidence” that Iranian security forces used firearms against unarmed protesters.

One of those killed was Farzad Ansari (above) who was targeted in Behbahan, SW Iran, activist Borna Khiabani @Borna___ tweeted #IranProtests. 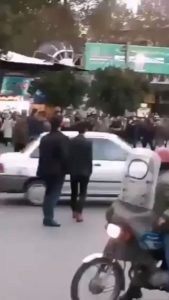 AP released undated footage from protests in Iran on November 24, RFE/RL reports. The videos (above) were shot by anonymous Internet users. Protesters in Shiraz were seen running away from heavy gunfire. In Kerman, security forces on motorbikes were seen chasing protesters. In Kermanshah, men in plainclothes — some armed with batons — were seen dragging a man away.

Turmoil in Baghdad, paralysis in Beirut and flames of unrest in Tehran; it has been a bad few months for Iran at home and elsewhere in the Middle East, where more than a decade of advances are being slowed, not by manoeuvrings on battlefields or legislatures – but the force of protest movements, according to The Guardian (HT:FDD).

Reports of killed and maimed demonstrators, and a continuing nationwide internet shutdown in Iran’s now week-long protests are of “grave concern”, and the Government and authorities must ensure rights of expression and opinion are protected, a UN group of independent experts said on Friday. The internet slowly trickled back on in Iran on Friday after a days-long shutdown, PBS reports. 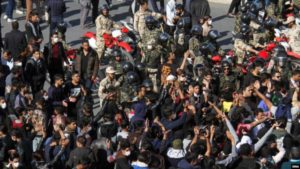 A sudden move to raise fuel prices sparked  some of the worst violence in the country in years, notes Erin Cunningham. The protests have flared in many of the same areas that experienced unrest two years ago, when demonstrators protested a similar proposal to slash state subsidies. Then, as now, lower-income Iranians rose up against a system that they said had failed them economically, she writes for the Post:

But a wider spectrum of society may have joined the revolt this time around, analysts say, pointing to demonstrations in major cities and at universities, including the University of Tehran. Protesters have also clashed with police in urban centers such as Isfahan, Mashhad, Shiraz and Tabriz.

“The common thread between the 2017-2018 protests and those taking place today is the sense among many Iranians that the economy favors entrenched interests and that much of the nation’s wealth is not being spent on its people,” said Esfandyar Batmanghelidj, founder of Bourse & Bazaar, a website featuring economic analysis on Iran. 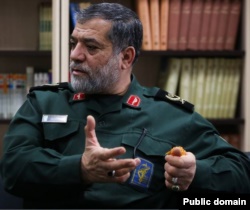 A commander of Revolutionary Guards’ Basij paramilitary on Thursday described the recent protests in Iran as a “full-scale world war” against the Islamic Republic. Speaking at a memorial ceremony in Hamadan on Friday Brigadier General Salar Abnoush (right) said ending the protests was a “miracle”, Radio Farda adds.

“But there is no way out. Even if this round is crushed, there will be more of this,” said Alireza Nader, a senior fellow at the Foundation for Defense of Democracies (FDD) “There is no more oil and increasing isolation. So I don’t see any way for the regime to get out of this,” he told Foreign Policy.

Ayatollah Khamenei himself decreed that the price increase was necessary and appropriate, essentially squelching any further discussion among his subordinates. And a retreat might be seen as a capitulation that would embolden the protesters, the Times adds.

“A larger issue here is a structural problem for Khamenei as well as the others — they cannot bring themselves to acknowledge there can be any type of legitimate protest,” said Mehrzad Boroujerdi, an Iran expert who is the director of the School of Public and International Affairs at Virginia Tech.

“They cannot quite acknowledge they have made mistakes,” he said. “The violence is a wonderful indication that they’re afraid. They’re hoping a strong show of force will force this decision down peoples’ throats.” 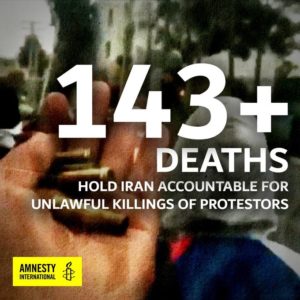 It is clear from Tehran’s reaction to the latest eruption of protests that the leadership is unnerved, and for good reasons, says Brookings analyst Suzanne Maloney: the rapid progression from mundane, localized demands to radical rejection of the system as a whole; the transmission and coordination of protests via social media rather than mediated through the more manageable traditional press; the engagement of the government’s core constituency, the rising middle class; and the near-instantaneous dispersion from local to national.

These factors expose the profound vulnerability of the Islamic Republic at a time when U.S. sanctions are severely limiting resources that might enable Tehran to address or preempt the sources of dissatisfaction, she observes.

“Iran is essentially a welfare state. In return for supplying Iranians with cheap energy, food and welfare, the government has taken over the economy. It is the grocery store, the gas station, the hospital, the airline, the bakery,” said Ali Dadpay, an associate professor of finance and expert on Iran’s economy at the University of Dallas.

“So, when the government reduces subsidies or cuts the budget, it upsets many who have been denied any other alternative,” he said. “I am not sure if the government understands the depths of Iranians’ frustration or the damage the widespread corruption is causing Iran’s economy. There is little incentive for it to become more proactive in addressing public concerns or complaints.”

The roots of the fuel price increase come out of a debate within Iran’s leadership over whether it is better to reach out to the rest of the world, as moderates such as President Hassan Rouhani has urged, or to build a largely stand-alone “resistance” economy, which Supreme Leader Ali Khamenei wants, says Ray Takeyh, an Iran expert and senior fellow at the Council on Foreign Relations.

Khamenei won that argument, and the price increase was necessary to help bring the state budget back under control,

he observes. But he is facing a serious backlash. The middle classes in Iran have long given up on the theocracy and its contrived political processes, he writes for Politico.

The hard-liners’ last pillar of support was thought to be the working class that they relentlessly venerate from their podiums, he adds. But the working poor care little about the government’s divine professions and are more interested in the welfare state that is now shrinking.

On Thursday, local news agencies reported a gradual return of Internet services to some parts of the country, the Post adds. NetBlocks, a civil society group monitoring worldwide Internet access, said on Twitter that real-time data confirmed the partial restoration of Internet connectivity in Iran.

in terms of internet censorship, Iran is caught in a no man’s zone between North Korea and China, needing more internet technology than the former but unable to titrate its internet like the latter, notes analyst David Auerbach. Iran’s protesters are no doubt aware of this and are surely awaiting the day when the government blinks.

Yet even if Iran’s government backs down, the China model still stands as a reference point, and the authoritarians of Iran will soon be doubling down on their study of it. Whether they can successfully copy it may be, for them, the difference between life and death, he writes for Tablet Magazine (HT:FDD).

Iran has not learned that its preferred methods for dealing with opponents are precisely what led to the rise of the caliphate, argues Tzvi Kahn, a senior Iran analyst at the nonpartisan Foundation for Defense of Democracies and a former Penn Kemble fellow at the National Endowment for Democracy. The Islamic State grew out of a sectarian war that Tehran has backed. If Washington fails to check Iran, Sunni jihadism is likely to endure, he writes for the Hill.

Iran News Wire @IranNW: Harrowing footage shows how security forces kick &beat detained protesters in the SW city Shiraz, #Iran behind the gates of what seems to be a police station. When they treat prisoners like this in broad daylight, imagine what they do behind closed doors. #IranProtests

Human rights and democracy advocates are signing a Movements.org petition to the United Nations to express grave concerns over the violent clampdown against protesters and the subsequent internet blackout in Iran. Read and sign here.