Taiwan is the territory most exposed to foreign disinformation from you-know-where, research suggests.

Thousands of lies flood social media every day in Taiwan, a new frontier of information warfare. Scholars say the island, which China claims as part of its territory but has been functionally independent since the 1950s, is the target of a Russian-style disinformation campaign by China to exploit social divisions and undermine democracy in the lead-up to the presidential election in January, Alice Su reports for the Los Angeles Times:

On Friday alone, Facebook shut down 118 Taiwanese fan pages, 99 groups and 51 accounts, including at least one unofficial fan group with more than 150,000 members for Han Kuo-yu, the candidate of the Nationalist Party, who is seen as Beijing’s favorite. He is seeking to unseat Tsai, whose Democratic Progressive Party takes a more confrontational stance toward China.

Like other democracies, Taiwan has been struggling to contain the spread of false information via social media. Several nations, including Singapore and Vietnam, have passed laws to combat “fake news,” but advocates of human rights and press freedom fear that such bans are being used as a pretext to censor news and stifle speech.

A recent study by the V-Dem Institute at the University of Gothenburg in Sweden found that Taiwan was the territory most exposed to foreign disinformation, based on weighted ratings by experts. The U.S. ranked No. 13, Su adds. RTWT

To show their solidarity with pro-democracy protesters in Hong Kong and their commitment to Taiwan’s self-rule, many consumers are boycotting bubble tea chains that support the “one country, two systems” formula that China uses to rule Hong Kong and that it hopes one day to extend to Taiwan, The Washington Post reports (HT:FDD).

The National Endowment for Democracy (NED) is not planning to change the way it operates, despite Beijing’s sanctions against US non-governmental organizations working in Hong Kong, NED president Carl Gershman told the Taipei Times.

“We’re not gonna change what we do,” Gershman said when asked if the sanctions would influence the organization’s activities. “We’re not the reason that people in Hong Kong are demanding freedom.”

“They’re demanding freedom because China is trying to take it away from them… Obviously, they’re struggling for their own freedom. That’s something between people in Hong Kong and China. That has nothing to do with us,” he said. 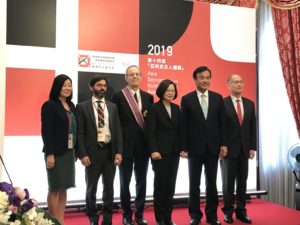 His comments came after being awarded the Order of Brilliant Star with Grand Cordon from President Tsai Ing-wen (above) in recognition of his contribution to the consolidation of Taiwan-US relations, as well as advancing freedom and democracy around the world.

This week’s Disinfo Matters is about online propaganda and a new game that allows players to beat up protestors in Hong Kong, notes Chaewon Chung.

The anti-protest game aimed at the protest movement in Hong Kong, called “Everyone Hit the Traitors”, and can be played for free at www.dalaoshu.net/, which means “rat” in Mandarin, she writes for Coda Story:

Characters that appear as the main targets on “Everyone Hit the Traitors” include the politician Martin Lee, and the student activist Joshua Wong. “Everyone Hit the Traitors” reminded me of a pro-democracy game called “Liberate Hong Kong”, which reflects the political beliefs of its developers. ….Hong Kong activists and software developers see the game as a part of the Communist Party’s digital propaganda against the protest movement. RTWT