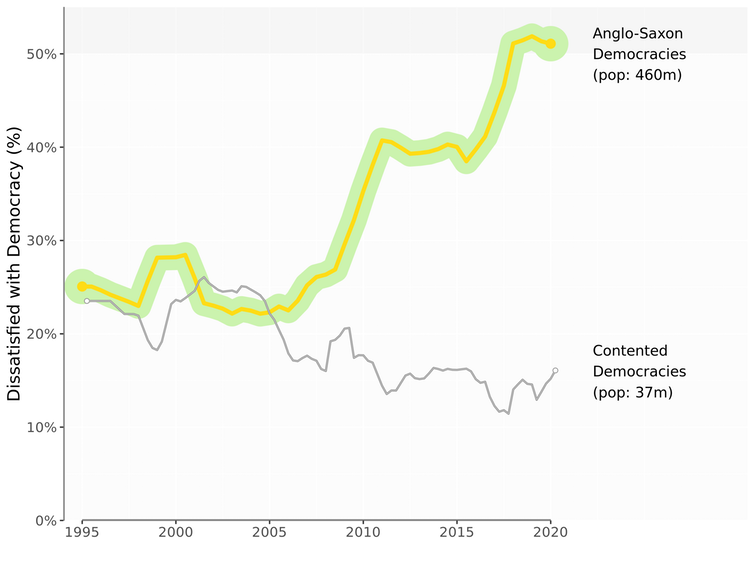 Contented nations are Norway, Netherlands, Denmark, Luxembourg and Switzerland; the Anglo-Saxon democracies are the US, UK, Canada, Australia and New Zealand. The thickness of lines is relative to population in each grouping. Foa, Klassen, Slade, Rand and Williams (2020). The Global Satisfaction with Democracy Report 2020, Bennett Institute for Public Policy, University of Cambridge.

Global dissatisfaction with democracy has increased over the past 25 years, according to a recent Cambridge University report. 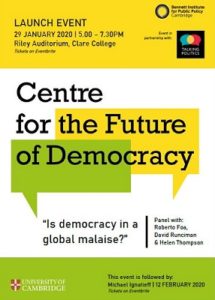 Drawing upon the HUMAN Surveys project, the report covered 154 countries, with 77 countries covered continuously for the period from 1995 to 2020. These samples were possible thanks to the combination of data from over 25 sources, 3,500 national surveys, and 4 million respondents, note University of Cambridge researchers Roberto Foa and Andrew James Klassen.

Not surprisingly, the gloomy headline finding – rising democratic dissatisfaction – attracted the most attention. Less widely discussed, however, is the “good news” – that a small sample of countries has bucked the trend, and have record high levels of satisfaction with their democracies, they write for The Conversation.

Why are some countries – the Netherlands, Denmark, or Switzerland – able to achieve high and rising levels of democratic contentment? There are four factors that stand out in explaining why some democracies have – or have not – experienced an eroding democratic satisfaction. These can be summarised by four “Ps”: polarisation, paralysis, perfidy (or scandal), and powerlessness. RTWT