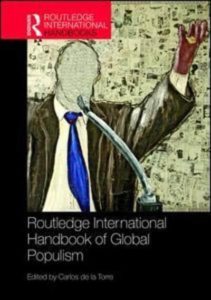 Since taking office in May 2017, Ecuadorean president Lenín Moreno has made headline-grabbing efforts to reverse the transformations wrought by his populist predecessor, Rafael Correa (2007–17 – yesterday found guilty of corruption), analysts Felipe Burbano de Lara and Carlos de la Torre suggest. Initially elected as Correa’s handpicked successor and the candidate of his Alianza PAIS movement, Moreno departed from the course set by Correa on matters ranging from the abolition of term limits to the launch of anticorruption investigations. Yet illiberal populism’s architect in Ecuador and his antipopulist successor have turned out to share one key political habit: a reliance on referendums, they write for the Journal of Democracy:

Despite their good intentions, Lenín Moreno and his allies damaged the prospects for a restored democracy when, echoing their populist foes, they appealed to the people for permission to assume powers outside the law. They similarly erred by approaching their opponents as enemies, rather than as political rivals with whom one might disagree. In the end, the institutions they created are weak. Even if Moreno is able to complete his term in office after the violent repression of October 2019, his government’s institutional changes now bear the stamp of the extralegal methods by which they were achieved. RTWT

See also @KarolinaWigura and Jarosław Kuisz’s essay on populism and emotions in @JoDemocracy –  now open for free at Muse here.

Felipe Burbano de Lara is research professor in political science at the Facultad Latinoamericana de Ciencias Sociales (FLACSO) in Ecuador. Carlos de la Torre is director of the Center for Latin American Studies at the University of Florida. He is editor, most recently, of the Routledge Handbook of Global Populism (2019).