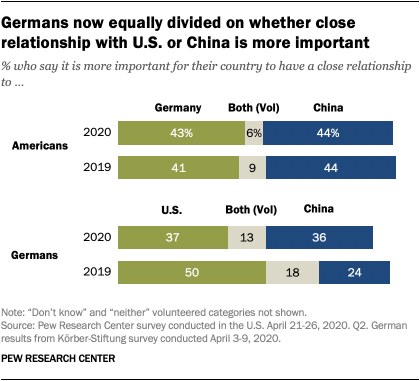 GERMANS NOW SEE THEIR country’s relationship with autocratic China as nearly just as important as its relationship with its traditional democratic ally, the United States – a stark change in mindset from a year ago and with the coronavirus pandemic now upending the world, according to a new survey released Monday, notes U.S. News @ World Reports:

The report from the Pew Research Center, in partnership with Körber-Stiftung, a nonprofit organization in Germany that examines political issues, shows that 37% of German respondents say they prioritize their country’s relationship with the U.S., with China close behind at 36%. A year ago, the difference was 50% to 24% in favor of the United States. Thirteen percent of those surveyed said it was important for Germany to have a close relationship with both countries.

China’s authoritarian rulers are presenting themselves as a viable rival to democracy and have played the UK economically, Stephen Kinnock, Labour’s foreign policy spokesman on China, has said, the Guardian reports:

In a significant hardening of the party’s stance towards China, he also described David Cameron’s golden era of engagement with China as “an abject failure”, adding the UK has been naive about China’s intentions. Kinnock called for what he described as a “respect-based realism” towards China, and said he feared at present the UK had insufficient strategic independence from China to stand up to the country’s intimidation.

Americans need to keep in mind that their enemy and rival right now is not China, but a Chinese Communist Party that has shifted into high-totalitarian mode, Stanford’s Francis Fukuyama writes for the American Interest. 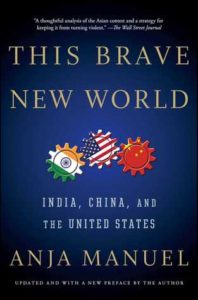 A new stimulus package — with a few key elements — would allow the United States to compete effectively with China and others, and position the country for future prosperity, security and job growth, former national security adviser Stephen J. Hadley and Anja Manuel, the author of “This Brave New World: India, China, and the United States,” write for the Washington Post.

China’s efforts to project disinformation and other malign influence operations – aka ‘sharp power’, according to the National Endowment for Democracy (NED) – are in the spotlight.

Mainstream media outlets have run several stories on Chinese disinformation during the COVID-19 crisis. Citizens and government officials across Europe and the United States are now paying attention, according to analysts Jessica Brandt, Head of Policy and Research at the Alliance for Securing Democracy, and Torrey Taussig, Nonresident Fellow in Foreign Policy at Brookings Center on the United States and Europe.

French President Emmanuel Macron called on China to end its “Europe bashing.” The High Representative of the European Union for Foreign Affairs and Security Policy Josep Borrell pushed for greater awareness of a global “struggle for influence” through the “politics of generosity.” Why has China abandoned its low profile for a more high-stakes strategy that has already prompted blowback? There are several potential reasons, they suggest:

As long as democracies fail to enact meaningful costs on the perpetrators of disinformation, Russia and China will continue to spin the game to their advantage, they conclude.

There is no simple or reliable way to define Chinese or Russian gray area or hybrid civil and military operations that affect U.S. strategic interests, according to Anthony H. Cordesman, Arleigh A. Burke Chair in Strategy at the CSIS. Many Russian low-level operations, claims, and political acts can have such an effect, but they are only reported as serving commercial interests, reflecting local claims or interests, or supporting Russia’s broader security needs, he writes in A Chronology of Possible Russian Gray Area and Hybrid Warfare Operations.

An additional analysis of U.S. and Chinese strategic competition is provided in a separate Burke Chair analysis, entitled U.S. Competition with China and Russia: The Crisis-Driven Need to Change U.S. Strategy. This report is available on the CSIS website here.