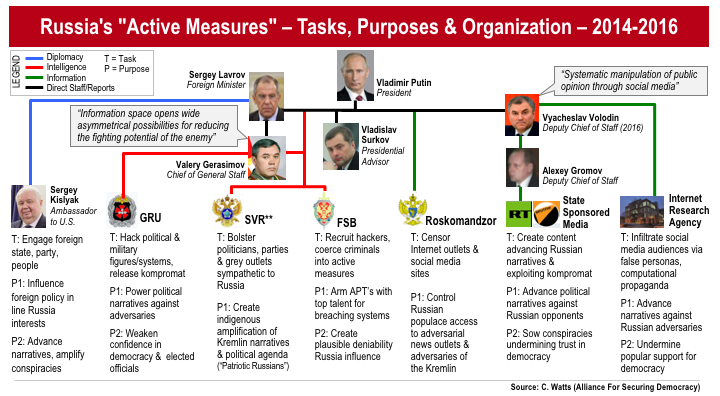 Is Russia succeeding in destroying American democracy, as one Washington Post columnist suggests?

Much of the global conversation around “fake news” has centered on the United States. Yet it increasingly seems that actions in the European Union may have a more lasting effect on the misinformation ecosystem, notes Poynter, a partner of the National Endowment for Democracy.

The European Union and Russia are locked in an open battle over the norms of international conduct – a clash between liberal universalism and authoritarian statism; the liberal international order and realpolitik, according to a new analysis. 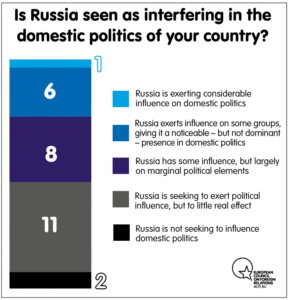 Russia’s interference in European internal affairs is one front line in this normative battle – Moscow’s attempt to erode the Western liberal consensus from within, argues Kadri Liik, a Senior Policy Fellow at the European Council on Foreign Relations:

In contrast to the West, Russia does not see information warfare as a separate or even a secondary effort in pursuit of its foreign policy goals. Instead, active measures, defeating adversaries through the “force of politics rather than the politics of force,” guide the Kremlin’s strategic approach to defeating the West, writes Clint Watts, a Non-Resident Fellow at the Alliance for Securing Democracy. The entirety of Russia’s government understands and participates in this mindset, but he highlights six key elements that give them a decisive edge over their adversaries on the information battlefield.

With respect to countering fake news, the EU and its member states need to adopt a few preliminary recommendations, Liik (left) adds. They should:

“Ultimately, the fundamental dimension of resilience is a society’s capacity to have a rational discussion that cannot be easily derailed by conspiracy theories, opportunist spin, or a lack of basic trust,” Liik contends. “This presupposes political elites that enjoy relatively high levels of trust, political institutions that are independent and credible, state finances that are transparent, media outlets that are not entirely sensationalist, minorities that are reasonably well-integrated, and historical traumas (if any) that have been thoughtfully addressed.” RTWT

Venezuela is the latest arena for Russian interference, evident in Moscow’s full-throated embrace of Maduro’s over-the-top accusations of Washington-engineered regime change, notes Carnegie fellow Julia Gurganus. So, why does Moscow choose to back Maduro, even as Venezuela teeters on the brink of collapse? On several issues, there is a clear alignment of interests and world view:

This article was originally published by Axios.

How policymakers, companies, and users can fight the growing threats of misinformation and fake news was the subject of a two-panel conversation on May 10, at Future Tense, a partnership of Slate, New America, and Arizona State University; New America’s Education Policy Program and Open Technology Institute; and the First Amendment Coalition.