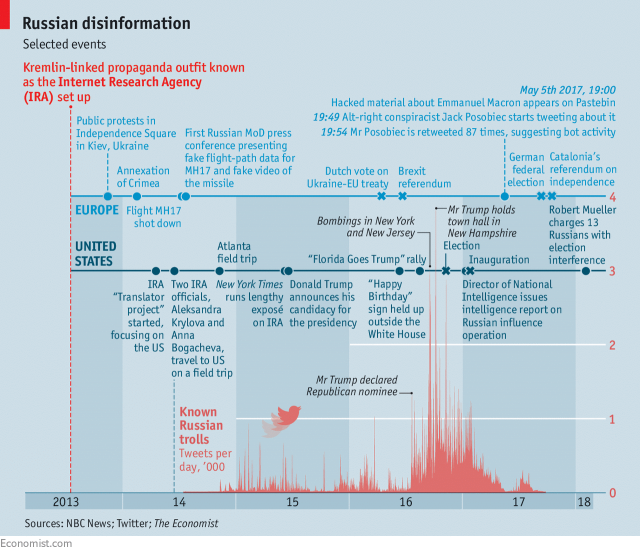 The use of disinformation—“active measures”, in the KGB jargon* of Vladimir Putin’s professional past—to weaken the West was a constant of Soviet policy, one that the would-be victims fought back against with similar weaponry, according to a must-read survey from The Economist:

After the collapse of the Soviet Union the use of active measures against the West went into hiatus, though they still found use against some countries of the former Soviet Union…..The cyber elements of such activities get the most attention, but much of Russia’s activity consists of techniques from the pre-digital Soviet manual: marshalling human assets, be they active spies or sympathetic activists; funding organisations that may be helpful; and attempting to influence the media agenda.

As disinformation increasingly threatens the integrity of democratic discourse, the National Democratic Institute continues to expand its responses for detecting, analyzing, and combating it, writes Daniel Arnaudo, NDI’s senior program manager for governance.

Long before the issue of Russian disinformation became the subject of headlines in the U.S., NDI was working with partners to understand and counter efforts to manipulate information, although the terminology used has evolved. Early NDI programs, for example, looked at the issue of “anti-democratic trolling.” In the June 2015 edition of the National Endowment of Democracy’s, Journal of Democracy, NDI’s director for elections, Pat Merloe, published an article focused on “election monitoring versus disinformation,” which focused on a variety of tactics that authoritarian regimes have used to create confusion about the credibility of elections, including the use of tactics such as “zombie election monitors,” Arnaudo adds.

Estimating how many bots are out there is hard, The Economist adds:

Primitive bots give themselves away by tweeting hundreds of times per hour, but newer ones are more sophisticated. Some generate passable natural-language tweets, thus appearing more human; others are hybrids with a human curator who occasionally posts or responds on the account, says Lisa-Maria Neudert, a researcher at the Oxford Internet Institute. It is not always easy to distinguish bots from humans. “Journalists spend a lot of time talking on social media. Sometimes they look almost automated,” she says.

“The KGB carries out a wide range of overt and covert activities, including the dissemination of officially sponsored propaganda, attendance at disarmament conferences, friendship and cultural events, and speaking engagements in the guise of accredited Soviet diplomatic and official representatives and journalists,” wrote Walter Laqueur and Robert Edwards Hunter in their 1985 book on the Soviet Union’s active measures in Europe. The Soviets’ goal was to establish “informal contacts with peace groups and their principal members, and the collection of information about the views of peace organizations and their membership.”

On 6 February, the UN Commission of Inquiry on Syria released a statement saying that it was investigating multiple reports that bombs allegedly containing weaponised chlorine had been used in the town of Saraqeb in Idlib and in Douma in eastern Ghouta. The pro-Kremlin disinformation campaign prepared its usual answer, the EU East StratCom Task Force reports:

….. a week later, Russia Today and Sputnik claimed that the Syrian civilian rescue group White Helmets together with Al-Nusra Front terrorists were “preparing to stage a provocation involving chemical weapons’ use, in Syria’s Idlib province in order to blame Damascus. Disinformation was based on a call by a “local resident” and was comprehensively debunked by the DFRLab. It continues the pattern of years, in which the White Helmets have been discredited and framed as collaborating with terrorists by pro-Kremlin disinformation. The overall aim remains to sow distrust in the work of this volunteer organization. 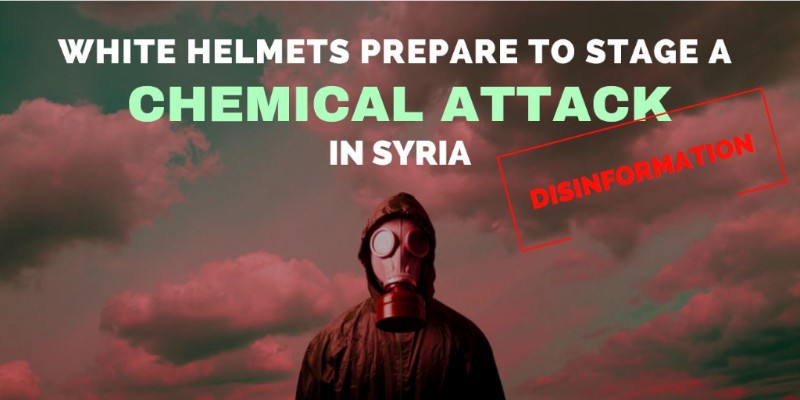